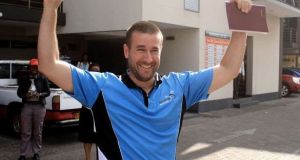 Controversial US pastor Steven L Anderson thanked Ireland for banning him because he was getting lots of extra listeners. Photograph: STR/AFP/Getty Images

Pastor Steven Anderson, the first person banned from Ireland under the 1999 Immigration Act, believes its is the country’s loss that he will not be able to preach here.

“I can go somewhere else. I was going for their benefit,” he said.

The pastor said he might now travel to eastern European countries not in the Schengen area as he is banned from all 26 affiliated countries as well as Ireland and the UK.

Had he been allowed to visit Dublin on May 26th, Anderson said he would have preached about “salvation through faith alone”.

“I had no plans to talk about abortion or homoxsuality. It would have been spirtually based,” he said.

Anderson has previously described homosexuality as “a wicked and evil practice”.

The 38-year-old, whose church is not affiliated to any Christian denomination, is based at Tempe in Arizona. He said he had been invited to come to Ireland by “individuals” who followed him on YouTube and someone else would now travel in his place. He would not say who or where this individual would speak.

Anderson agreed that he had equated paedophilia and homosexuality and suggested that the cure for Aids was to kill all gays. He had also said, after the 2016 shooting in Orlando, Florida, where 49 people were shot dead in a gay bar, that “there’s 50 less paedophiles in this world, because, you know, these homosexuals are a bunch of disgusting perverts and paedophiles”.

Anderson said he based all his beliefs on the 1611 King James Bible, “about half” of which he knew off by heart.

Asked if he is a Holocaust denier, the pastor said: “I do not believe the official narrative. I do not believe six million Jews were killed. I believe some were killed...It is exaggerated so we can have a Zionist state and justify Israel’s attacks on the Palestinians.”

He said it was true he had prayed in a sermon that the last US president, Barack Obama would die and go to hell. He also dislikes the current president Donald Trump and believes Pope Francis is “the anti-Christ” even though his own beliefs correspond exactly with Catholic teaching on abortion and contraception.

He said it was correct that he had described Minister for Justice Charlie Flanagan, who banned him from Ireland, as “a wicked and evil person” and as being “anti- the true word of God.”

Anderson said he had not been to Ireland before “apart from a lay over at Dublin airport” but that his “mother’s people were Irish. Tackaberry was the name”.

However, he said he was “not unhappy” about the Minister’s decision as the response to the move “permits more people to find out about me (through social media and online)”.

Meanwhile, in a letter to Mr Flanagan on Tuesday, the Irish Council for Civil Liberties requested details on how the decision to ban Anderson from Ireland was arrived at.

The council’s executive director Liam Herrick said that, while he shared “the widespread public concern” at statements made by the pastor, it was “essential that any measures taken against individuals in this context must be based on clear and coherent legal principles, which must be applied consistently and fairly”.

‘Summer is not lost ’ - Taoiseach announces accelerated easing of coronavirus restrictions 14:51
Cities continue to account for outsized proportion of confirmed Covid-19 cases 14:46
HSE says contacts of confirmed cases four times more likely to get Covid-19 14:00
Emissions ‘cop outs’ for agriculture based on faulty science ‘not acceptable’ 13:57
Coronavirus: People to be allowed to travel anywhere in their county from Monday as Ireland moves to exit lockdown 13:25