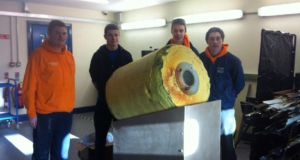 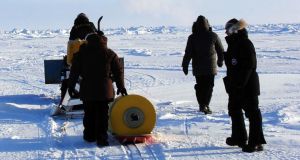 The deployment by Wood Hole staff of the buoy in the Arctic in 2011. Photograph: Steven Lambert

The buoy he had seen was attached to an ITP, or ice-tethered profiler, placed in the Arctic Ocean by the prestigious US Woods Hole Oceanographic Institution almost three years ago to measure aspects of climate change.

It had drifted 15,000 miles from its “station” on a 3.5 metre-thick ice floe to Broadhaven Bay, all the while sending messages back to Massachusetts.

Sweeney traced its ID code to the manufacturers, who said the buoy belonged to a network of devices in the Arctic measuring global warming and the ocean’s role in shrinking sea ice.

“We’ve deployed about 60 in the Arctic since 2004 and we have had a few which washed up on Iceland and northern Svalbard [Spitsbergen] and on the outer Hebrides,” John M Toole, Woods Hole Oceanographic Institution co-principal investigator, tells The Irish Times. “This is the furthest south we’ve had one travel.”

ITP 47 had been deployed on April 11th, 2011, as part of an annual sampling effort with the North Pole Environmental Observatory Programme.

It was programmed to transmit observations on ocean temperatures and salinity versus depth via satellite, while drifting slowly on Arctic ice.

However, it fell silent on Christmas Eve 2011.

“ITP 47 had become buried in ice on that Christmas Eve, but it was working away all the time,” Toole says. It was damaged between Spitsbergen and northern Greenland, but then resurfaced and continued sending position information until October 4th, 2012.

By then, its electronics were so waterlogged that it was reported as lost, until it turned up in Blacksod last autumn.

ITP 47 has been given a new berth in north Mayo. Sweeney has been working with transition-year students from Coláiste Chomáin in Rossport to piece together its story and that of the work of the Woods Hole Oceanographic Institution.

An exhibition of that work has been commissioned by Brendan Murray, artistic director of Áras Inis Gluaire, the Belmullet Arts Centre, which includes video, images and a soundscape that captures the buoy’s trip across the Atlantic and the sort of wildlife it encountered.

“ I feel it’s still working, it still has a message,” Sweeney says. “It wants to tell us something about what’s happening to our planet further north.”