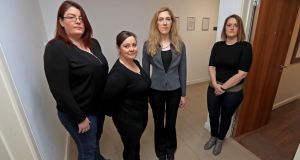 Apartment owners at a Celtic Tiger-era development in Dublin 13 are facing a bill of €826,000 to remedy serious fire-safety issues found at the block.

Expressing anger and disbelief at their situation, some of the purchasers have urged the Government to set up a scheme for dealing with defects discovered in apartment blocks like theirs which were constructed under boom-time building regulations.

“There should be a sinking fund for people in this situation,” said Hazel Gleeson, one of the apartment owners at Marrsfield Avenue in Clongriffin, north Dublin.

“Is it going to take an apartment block of burning bodies for the Government to do something about this?” she asked.

Marrsfield Avenue was built in 2007 by Pierse Homes, a well-known developer which went into liquidation in 2010 with debts of €212 million.

It has since emerged that the apartments did not comply with the fire-safety certificate granted for the block.

A report from McGovern Surveyors, seen by The Irish Times, details a lack of fire stopping in many areas, such as within the cavities which carry waste pipes and run vertically through multiple apartments, and in the openings of lift shafts, as well as around electrical meter cabinets and in waste pipe cavities in underground car parks.

Other issues include hallway walls not being built up to ceiling level or the tops of walls separating neighbouring apartments.

Residents have been told that a fire would not be contained within any compartment for more than 30 minutes. They should be able to contain a fire for 60 minutes in order to give residents time to get out safely.

Most of this money (between €3,334 and €5,421 per apartment) is to cover remedial works to common areas of the block, while the rest is related to work needed in individual apartments.

There are two large stakeholders within the development, Dublin City Council and Hollybrook Newhomes Investments Ltd, both of which have agreed to pay their portion of the remedial costs upfront.

The remaining 25 apartments in the block are owned privately, and Dublin City Council has agreed to loan the management company €648,411 over a 10-year period to cover money owed by private owners for remedial works in the common areas.

This interest-free loan is to be passed on to the private owners, who will share the €648,411 debt between them. In return, Dublin City Council will receive a reduction in their service charge equal to the loan amount.

Prior to 2014, Dublin Fire Brigade granted fire safety certificates on behalf of Dublin City Council based on plans submitted before the development was built.

Under building regulations at the time, there was no required follow-up to ensure the complex was built to the standard set out in the plans.

A number of private owners believe they had no real input into the decision regarding the loan because of their minority representation on the board of management.

The decision was voted in at a management company meeting in December – a decision which resident Joanne Tyrrell says felt like a done deal.

“I felt like that egm was a fait accompli,” said Ms Tyrrell, a secondary school teacher.

“Now I’m going to be in debt to Dublin City Council over the next 10 years, despite the fact it was their self-certification that allowed it to happen in the first place.”

“The Government needs to put in regulations so this doesn’t happen to anyone else, so this won’t happen to my child when he goes and buys a place,” said Ms Gleeson, a HSE employee.

None of the women knew anything about the issues until a letter arrived through the door last July from their management company, informing them of the findings of a fire safety audit.

Ms Byrne, a school administrator at DIT Kevin Street, described it as “a pure farce”, while Ms Gleeson said they “don’t have a say in what happens because we are always outvoted”.

The women said they would like to pursue the developer by being added to its list of debtors.

“What happens otherwise – we just shut up and get on with it?” Ms Tyrrell asked.

“I get up early in the morning, I struggle to pay my mortgage, I pay all my taxes, I pay nearly €2,000 in management fees and now I have to find €6,000 to make my apartment fire-compliant? I’m not looking for a handout, but I don’t want to be pursued by a debt collector because I can’t pay the money for a situation that I didn’t get myself into in the first place.”

The four women bought their apartments on their own, some with the help of the affordable housing scheme. They hope that by speaking out on the issue it may create some sort of change, or at least give comfort to people in similar situations.

“I’d like to see a big network of everyone who’s having these issues get together and create a bit of a force... I want a bit of solidarity with people who are in the same boat as us,” Ms Byrne said.

Ms Barrett, a legal executive, agreed: “If we can bring some public awareness to our plight and indeed get anything positive out of it, I would be very happy to contribute in any way I can.”

She adds: “Why is the onus on us owners to pay up when we were never made aware of the issues, or had any knowledge of whether fire regulations were being complied with?”

“It doesn’t feel like anybody is on our side except us. And we’re a very small voice,” Ms Tyrrell added.