An Taisce seeking review of N86 development between Dingle and Annascaul 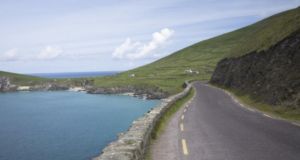 Dingle Peninsula: Locals disapprove of An Taisce requesting a review of plans for an upgrade to the N86 road. Photograph: Getty Images

Some 700 people marched in Dingle, Co Kerry, on Saturday to show their disapproval for plans by An Taisce to seek a judicial review of a €65 million upgrade of the N86.

The organisers have vowed to march on An Taisce headquarters in Dublin and have appealed to them to withdraw their “ambush” and “road block” tactics of a much-needed upgrade of the main road into the peninsula which services medical as well as business needs.

The 28 km project between Dingle and Annascaul would see a straightening and widening of the narrow road and has been sought for over 30 years. Part of the road east of Annascaul has already been completed.

An Taisce said in 2012 the road should not be interfered with as the hair pin bends were natural geological features and a proper environmental assessment of the entire road upgrade between Dingle and Tralee was needed.

Dingle native and former senator Joe O’Toole said the bends of the road were not part of the heritage of the area and An Taisce and the people objecting did not understand what was at stake.

The plans were to upgrade an existing road, not build a new road and what the people of west Kerry were seeking would be considered normal elsewhere, he said.

Ambulance representatives, business and tourism leaders also appealed to An Taisce not to stall the project.

Mayor of Kerry John Brassil addressed the crowd on Saturday. He said An Taisce’s judicial review of a much needed road scheme was “dangerous, irresponsible and wrong, wrong,wrong”.

Former mayor of Kerry and local councillor Séamus Cosaí Fitzgerald appealed to An Taisce to withdraw the challenge. The heritage body had gone too far this time, he said.

“For the people who have lived, worked and protected this environment and the landscape for decades , I am pleading with An Taisce to withdraw their request for this judicial review and allow the safety improvement works to continue,” he said.

“Once again we are calling on An Taisce to listen to the voice of reason and withdraw their request for a judicial review. Their last minute tactic is a move to jeopardize our chances of seeing the upgrading of this road.”

An Taisce, who have not commented in recent weeks, re-iterated their claim that the legal requirement for an environmental assessment of the whole road scheme has not been met.

Stressing it was “an independent voice” for heritage and environmental issues, the An Taisce statement said: “Our laws provide, as a statutory right, provision for citizens and organisations to review decisions like this.

“In granting An Taisce permission for this challenge, the courts have already decided that there is an issue which needs to be fully heard and decided. The matter is now in front of the courts for them to decide on the legality or otherwise of the decision.”