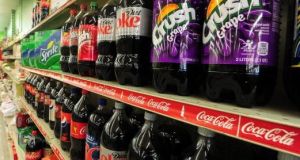 News of the levy was welcomed by health campaigners, but dismissed by opponents as a “piece of political theatre”. Photograph: Getty Images

A sugar levy on soft drinks in Britain will be introduced in two years’ time to tackle a growing obesity crisis, chancellor George Osborne said in a surprise budget announcement on Wednesday.

The proposed tax delighted health campaigners but angered drink makers. Just months after the government ruled out a sugar tax, Osborne said the levy, which would be imposed on companies and based on the sugar content in drinks, would raise about €500 million pounds (€636 million) annually.

“I am not prepared to look back at my time here in this parliament, doing this job and say to my children’s generation: ‘I’m sorry, we knew there was a problem with sugary drinks. We knew it caused disease. But we ducked the difficult decisions and we did nothing’,” he said.

Britain joins France, Belgium, Hungary and Mexico which have imposed some form of tax on drinks with added sugar, while Scandinavian countries have levied similar taxes, with varying degrees of success, for many years.

Shares in drinks’ groups fell on the news.

Britain’s Food and Drink Federation said Mr Osborne’s tax was “a piece of political theatre” that would make no difference to obesity and cost jobs.

Osborne said obesity fuelled rates of heart disease, diabetes and other illnesses which cost the economy £27 billion annually and were a huge burden on the state-funded National Health Service.

“Five-year-old children are consuming their body weight in sugar every year,” he said. “Experts predict that within a generation over half of all boys, and 70 per cent of girls could be overweight or obese.”

The tax would apply to drinks with a total sugar content above 5g per 100ml, with a higher band for even more sugary drinks. Mr Osborne said a can of cola typically had nine teaspoons of sugar, with some containing 13.

The Office for Budget Responsibility, the government’s budget watchdog, said the figures implied a levy of 18p per litre, or 24p for those in the higher band. A two litre bottle of Pepsi retails for about £2.

Osborne acknowledged the price rise might be passed on to consumers but said the money raised would be spent on funding school sport.

Last November, a call by British MPs for a sugar tax was rejected by the government, leading to accusations it was giving in to lobbying by food giants.

Supporters say it will raise the cost of high-calorie products and reduce consumption, in the same way that tobacco taxes have helped reduce smoking.

A scientific study published in January found a 40 per cent reduction in free sugars added to drinks over five years could result in some 500,0000 fewer adults being overweight and a million fewer being obese.

That in turn would prevent between 274,000 and 309,000 obesity-related type 2 diabetes cases over the next two decades.

The study’s author, Graham MacGregor, a professor of cardiovascular medicine and chairman of the Action on Sugar campaign group, said that to be effective, the levy had to be at least 20 per cent on all sugar-sweetened soft drinks and escalate if companies did not comply to reformulation targets.

News of tax was welcomed by health campaigners.

“We did it guys!! We did it !!! A profound move that will ripple around the world,” tweeted celebrity chef Jamie Oliver, who has led a high-profile campaign for action.

“By contrast sugar and calorie intake from all other major take home food categories is increasing - which makes the targeting of soft drinks simply absurd,” said Mr Partington.

Richard Tiffin, professor of Applied Economics at the University of Reading, said: “The government has heeded warnings that a tax on consumers will not change consumer behaviour sufficiently to have a significant impact on obesity.

“This is a revenue-raising measure and it is pleasing to see that revenue from the tax will be spent on measures that may have a more significant impact.”

However he cautioned that it was necessary to . . . “better understand the reasons why people make poor dietary choice to design really effective policies using this new revenue stream”.