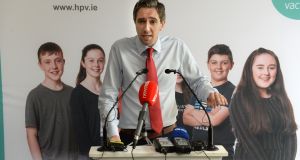 Minister for Health, Simon Harris, TD at the launch of the 2019/20 schools HPV vaccine programme, the HPV vaccine is now being given to all first year students in secondary school including girls and for the first time, boys. Photograph: Dara Mac Dónaill

Proposals to introduce mandatory vaccination schemes in schools may be “challenging to do legally,” according to preliminary advice from the Attorney General, Minister for Health Simon Harris has said.

Mr Harris had recently asked AG Séamus Woulfe, legal advisor to the Government, to examine the constitutionality of making vaccines mandatory in schools or creches.

“We obviously have a number of competing rights, children in our country have a right to primary education,” Mr Harris said. “We also have creches though which are in a different category as well, so there is a number of areas that we can look at,” he said.

“I think it’s fair to say we absolutely can do some things, and there are other things that may be more challenging to do legally,” he said.

Mr Harris said he intended to meet Minister for Education Joe McHugh, and Minister for Children Katherine Zappone to discuss potential options. He has also asked the Health Research Board to examine how effective mandatory schemes had been in other countries in increasing uptake rates.

“I expect by the end of this year I’ll be in a position to make very clear what policy and legal changes we may be able to make,” he said.

Mr Harris was speaking at the launch of the HPV (Human Papilloma virus) vaccine programme for boys in their first year of secondary school, from this September.

In recent years a downward trend in the uptake of the vaccine among girls was reversed. Vaccination rates rose from a low of 50 to 70 per cent, following a significant public health information campaign.

Previously 87 per cent of girls had been receiving the vaccine, but rates began to fall as unsubstantiated concerns were raised about the product by anti-vaccination campaigners, primarily on social media.

“A number of social media companies have stepped up to the plate and said they will crack down on this, unfortunately not all of them have,” he said.

Ms Brennan had become a prominent patient advocate for the HPV vaccine following a terminal diagnosis when she was 24-years-old, and she fronted a Health Service Executive public information campaign.

“There was something about Laura that people latched onto, she walked into a room and people looked up, she had an energy that was infectious, an energy that made her a fantastic advocate for the HPV vaccine,” her brother said.

At the launch Mr Harris credited her for helping to reverse the downward trend in vaccination rates.

“Laura poured herself into this campaign, knowing every time she told her story, it had the potential to save a life,” her brother said. “If she had had the HPV vaccine it is very likely she would be with us today,” he said.