‘Getting to five kilometres in 45 minutes was my Everest’

From being a ‘sweaty, slobbery mess’ in December, I’ve dropped two stone on the road to the Great Limerick Run 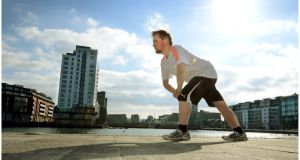 Admitting to obesity is not an easy thing to do, even if it’s in the past tense. Years of inactivity and overindulgence during college years left my body in poor shape by the time I graduated last summer. Standing at a less-than-average 5’6” and yet weighing considerably more than 13 stone was neither an acceptable nor healthy lifestyle, but until a few months ago, it was something I just lived with, until I decided enough was enough.

Exercise and I always had a tempestuous relationship. The mentality I had for a long time was that it was a necessity, but a necessity that I could easily skip out on if I wanted. Who’d notice? No one. My physical inactivity throughout school and college really got the better of me.

My change of mentality took place in December. After one night of heavy drinking and foolish behaviour, I made an investment in a decent tracksuit and decided to try going off alcohol for a few weeks. That’s when I decided to give running a lash.

My sporadic exercise regime plateaued for some time, until I remembered a conversation I had with a close friend. My friend has cystic fibrosis, and for the first time we had an open conversation about how there’s a level of ignorance when it comes to treatment and medication. She told me of the hospital fights and pain she went through. I made up my mind before we finished our conversation. I had set a goal of running for Cystic Fibrosis Ireland.

It didn’t take me too long to decide to take part in the Great Limerick Run. As a student in the University of Limerick, I had seen the participants run through the campus, often when I was on the way for a pint or a bite to eat. The irony has only crept up on me recently.

A 10-kilometre race was a nice, achievable goal, especially with four months to train, as well as keeping me motivated to keep going. In a moment of madness though, I decided to click half-marathon. That decision haunted me for a few hours. Why did I do that to myself?

I didn’t tell anyone for a few days in case the mocking would start. It wasn’t that noticeable that I had shifted a few pounds and I fully expected people to tell me I was nuts. That was when I started to take gym membership seriously.

Every day after I finished work in Tara Street, I would go for a run in the gym, but was constricted to the treadmill. I didn’t want to try my hand at the other machines and injure myself or worse, look like an idiot in front of regular gym-goers.

I struck up a conversation with Aaron Power, a volunteer at my gym, who sat me down one day and gave me a routine and a lesson in how to use each of the machines and correctly use the weights. Through this health mix of cardio and weights, the pounds really started to fly off.

I moaned about my aches and pains to my friend Dan, who undertook a similar endeavour a few years ago. He told me to go on protein powder, which actually managed to alleviate some of the morning-after affects that dogged me for a few weeks.

After plucking up the guts to let the world know I was going to endure a whole 13-mile run with people who are probably twice my age and three times fitter than me, I was blown away by the positive reaction. People were genuinely nice and somewhat proud of me for sticking it out and not shying away from the challenge.

It’s a little over a month away from race day and my record time so far is 16km in just over an hour and a half. This time six months ago, I was more than 13 stone and was embarrassed to buy clothes for myself. Now I’m just about 11 stone and most of my clothes are medium. I feel lighter and I feel healthier and, even better, I feel it’s sustainable. Now all I need to do is learn how to grow a few inches.