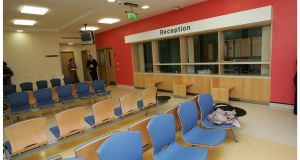 Cork University Hospital has had to cancel all non-urgent elective surgery for the second time in a month because of overcrowding. File photograph: Bryan O’Brien

Cork University Hospital has had to cancel all non-urgent elective surgery for the second time in a month because of overcrowding and a build up of patients awaiting admission from the hospital’s emergency department.

“We had 48 people in the emergency department this morning awaiting admission up the wards which is the most we ever had – they had been assessed by the consultants and deemed to require admission but we are waiting for beds to free up in the wards,” he said.

Mr McNamara told The Irish Times that the nub of the problem is that CUH has not been able to discharge as many patients as it needs over the past few weeks to free up ward beds so that patients can be admitted from the emergency department.

“We usually have around 200 people a day presenting at the emergency department – around two thirds are discharged without admission but one third are admitted which means we need around 75 discharges a day from the hospital wards to keep up with the number of people coming in.

“But we just haven’t been getting that level of discharge for the last 10 days or so. There’s been a perfect storm of different things happening – older people coming in with respiratory problems, people falling on ice – at one stage last week we had 54 orthopaedic patients.”

Mr McNamara said that the hospital has about 900 beds in total, including 500 adult patients, 150 maternity patients, 75 children and 50 mental health patients but the last 10 days has seen much longer stays across all departments in the hospital.

“Our average length of stay is 5.8 days which is the shortest in the country and about half of some of the Dublin hospitals but it’s grown over the past few days so we just have not been able to meet our 75 discharges a day to free up space for those presenting at the emergency department.

Mr McNamara said that it was with great reluctance that hospital management in consultation with clinicians took the step of cancelling all elective procedures this morning with the aim of freeing up beds in various wards in the hospital to allow admissions from the emergency department.

“Cancelling elective surgery is something we abhor doing – we did it last week as well which was the first time we did it in around two years but it’s not something we like doing – coming into hospital for a procedure is traumatic enough for someone and then having it cancelled is doubly so.

“We had 28 elective procedures scheduled for today and after consulting with the clinicians – we cancelled four – we got additional ambulance support to move some patients to community hospitals which helped free up ward beds.

“That meant we were able to reduce the 48 on trolleys in the emergency department awaiting admission but this problem isn’t going to be solved overnight, it’s going to take several days with discharges of 90-100 people a day to get back to a steady state again.”