Weather warnings in place as snow forecast across Ireland 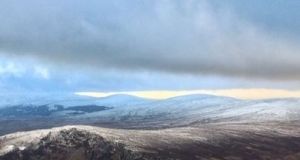 Up to 8cm of snow is expected in parts of Ireland on Thursday, with two weather warnings in place. Photograph: An Garda Síochána

Wrap up in your warmest woollies as up to 8cm of snow is expected in parts of Ireland on Thursday, with two weather warnings in place.

Met Éireann has issued its second-highest weather warning for snow and ice for Co Donegal, Co Leitrim, Co Mayo and Co Sligo on Thursday, as temperatures are expected to fall significantly.

A yellow alert for snow and ice has also been issued for Co Galway, Co Cavan, Co Monaghan, Co Longford and Co Roscommon, with up to 2-4cm of snow expected in these counties.

Both warnings will come into effect at midnight for 24 hours and the largest amounts of snow are expected on high ground.

A spokesman for the Department of Environment has urged people not to walk or play on frozen over water as it may break.

“A further concern with colder weather expected is the formation of ice on floodwaters. People are asked to be careful and parents are asked to supervise children,” he said.

He warned road users and pedestrians to take extra care during the freezing weather conditions.

The duty forecaster for Met Éireann said temperatures would drop to between 0 and -3 degrees Celsius on Thursday night.

“There’ll be clearer skies [and] less wind there so the temperatures will fall lower. But it will be dry.”

The forecaster said drivers could expect icy conditions on the roads following the heavy rain and floods in recent weeks.

Dry and cool weather conditions are expected in the east and south of Ireland for Thursday.

The forecaster said cold conditions will continue for the rest of the week.

“ [Temperatures] were way above normal in December, but now they’re more normal or a bit below for the last week.”

Milder weather fronts and unsettled weather can be expected early next week.