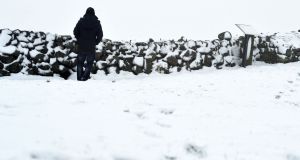 Temperatures at Moorepark, Co Cork were -4 and was still -2 by early morning. Temperatures in most of the country were barely above zero by 9am.

The weather warning was in place until 11am on Thursday.

Met Éireann uses status yellow alerts to notify people at risk, but they are less serious signals than orange and red weather warnings, according to forecasters.

Scattered snow showers will mostly affect parts of west Munster, Connacht and west Ulster, leading to accumulations of 1 to 3cm in some areas.

Met Éireann forecaster Siobhán Ryan said some snow was expected on Thursday morning, especially on higher ground, in the western half of the country, but it would turn to rain or hail by afternoon.

Temperatures of between minus three to minus four degrees Celsius are expected on Thursday, while a sharp severe frost will develop on Thursday night.

Later on Thursday night a southwest breeze will bring in cloud from the Atlantic and rain to coastal counties, which will lead to a rise in temperatures.