Some ferry sailings cancelled due to high winds 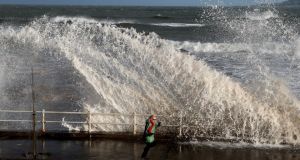 A person walks past as waves crash onto the Coast Road in Malahide, Dublin on Friday. Met Éireann has issued a fresh weather warning today with gusts of up to 110km/h forecast and a risk of coastal flooding. Photograph: PA 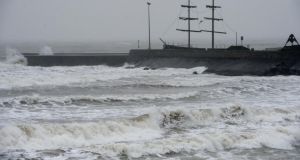 Met Éireann has upgraded its weather warning for today and is forecasting gusts of up to 120km/h today with a risk of further coastal flooding.

It upgraded its alert from yellow, the lowest level, to orange, for counties Wexford, Galway, Mayo, Clare, Cork, Kerry, Limerick and Waterford with winds of 80 or 90km/h and worsening tonight.

Gusts of between 100 to 120km/h are forecast and winds will be most powerful in exposed coastal areas, it said.

They also warned of a threat of local flooding inland from heavy downpours.

The conditions have forced the cancellation of the 2.45am and 2.30pm Stena Line sailings from Fishguard to Dublin tomorrow and the company said sailings on Tuesday were under review.

Surf reports and enthusiasts from around the country have been warning of massive swells moving with the storm and estimating waves in some areas could reach anywhere from 10 metres to as high as 20 metres.

Speaking in Saudi Arabia, Taoiseach Enda Kenny said he expected Government members would be briefed on the damage caused by the weather over the coming days and then work with local authorities accordingly.

“I think it is necessary to carry out an examination of the scale of damage from Lahinch to Galway and other locations on the west coast which have been damaged and assess what impact that is having and the impact of potential costs involved here and have detailed and up to date realistic reports on what needs to be done before we can consider the matter further. “

Mr Kenny said he visited Bertra Beach in his Mayo constituency on Friday and that the scale of the damage was “quite enormous”.

“What took 50,000 years to put together was blown away and washed away literally in 12 hours,” he said.

The continued bad weather is expected to hamper clean-up and repair operations including at the tourist and surf resort of Lahinch, Co Clare, which had its promenade destroyed in the last storm. That bill is expected to be as high as €5 million.

In Dublin the River Liffey was exceptionally high at lunchtime but there are no reports of flooding. The river burst its banks in the docks area of Dublin on Friday.

Across the country, homeowners and businesses have been counting the cost with the series of storms estimated to have run up insurance claims of €200 million - and, in turn, hitting premiums.

One of the worst flood-hit areas was Galway where the Spanish Arch area of the city was under several inches of water following high tides and storm, while in Cleggan in the county six cars were swept off the pier at the Inishbofin ferry docks.

Elsewhere, water levels on the River Shannon are expected to rise over several days into this week with parts of the Midlands at increased risk of flooding.

Forecasters said the alert would remain in place until midnight and warned the combination of the wind, high tides and very high seas posed the main risk to coastal areas.

It said coastal flooding continued to be a threat particularly in the south and west where a “family” of low pressure weather fronts crossing the Atlantic are battering coastal regions.

The warning is unwelcome news for the businesses and property owners trying to repair the damage from last week’s violent storm that saw powerful winds and tidal surges rip up roads and promenades, flood properties and sweep cars into the sea.

Insurance Ireland said it is too early to estimate the cost of the repairs. But the representative body for insurance companies revealed bills for the last four major floods ranged in cost from €54 million in June 2012 to €244 million in November 2009.

Roads have been closed and people warned to keep away from seafronts in Galway, Clare and Cork while in Dublin the City Council was bracing itself for possible damage to walls along the Liffey quays.

Flooding at the East Link toll bridge caused it to be closed for a few hours on Friday.

The seafront at Clontarf was also flooded and shop owners were bracing themselves by putting out sandbags, as some of the highest tides of the year have been predicted this weekend.

The promenade walkway in Clontarf flooded on Thursday for the first time since 2004.

Floodgates on the Dodder and Tolka rivers will remain closed until the middle of next week, while the Liffey boardwalk will be closed to the public until next week, with flood barriers blocking entrances.

In Cleggan Co Galway six cars were swept off the pier close to the departure point for the Inishbofin Island ferry yesterday.

Noreen Higgins of the nearby Oliver’s Bar said one of the cars could be seen on the sea bed but there was no sign of the others.

Leisureland in Galway remains closed and many shops and businesses in the Spanish Arch and Flood Street area of the city are trying to repair severe flood damage.

In Co Mayo the river Moy burst its banks in Ballina yesterday while in Westport part of a bridge collapsed.