Before this, the only other Malthonica silvestris found was in Co Cork 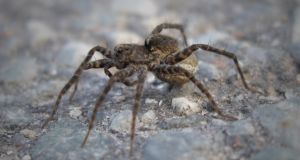 The spider, found living in a silk-lined tube in a rock crevice in Whitehead, is harmless

A rare funnel-web spider has been discovered in Co Antrim.

Malthonica silvestris is a close relation to the house spider, and, thankfully, is very different to the poisonous variety found in the Southern Hemphisphere.

The spider, found living in a silk-lined tube in a rock crevice in Whitehead, is harmless.

“Not only is this the first record for Northern Ireland, but it is very rare across the rest of Ireland too,” said Adam Mantell, Northern Ireland officer for the charity for the conservation of insects, Buglife, who discovered the spider.

“With two out of three of our bugs in decline and so much wildlife disappearing from our countryside, it’s brilliant to have some good news for once, and add another spider to the list of species found in Northern Ireland.”

Prior to this discovery, the funnel-web has only been found in Co Cork.