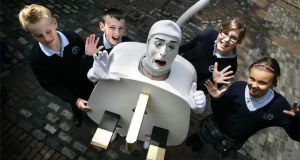 Now let’s say this can be done within the next two years.Too good to be true? It’s not, if we make public sector energy saving a priority. There are plenty of pilot projects in health, education and local authorities to show the way. What’s missing is the urgency and political will to make it happen now, and not in five or 10 years’ time.

Ireland spends at least €600 million a year on energy costs in the public sector, according to the recently updated National Energy Efficiency Action Plan. Much of it goes on heating, lighting, cooling, and computers in several thousand schools, hospitals, State offices and other facilities.


Lack of progress
The Government’s target is to cut these costs by 33 per cent by 2020 – but progress is so slow to date that they will do well to save 20 per cent, or €120 million, by then. Meanwhile, existing projects show that with programmes targeted at behaviour change and simple low-cost initiatives, €120 million could be saved within two to three years. So what’s the hold-up?

Take schools. They need every cent they can save – especially since their capitation funding, which pays for running costs including energy, was cut by 3.5 per cent last September. But if they could save 10 per cent of capitation costs through energy efficiency, surely Minister for Education Ruairí Quinn would want to tell them about it? He’d mention it in every interview on school costs, surely?

Well, Quinn did launch a website last November to show schools how to make major energy savings, but it got almost no publicity and there are no obligations. Individual schools have saved 20 per cent, even 50 per cent, of their energy costs by simple measures such as turning off heating at weekends, monitoring boilers, closing doors and powering whiteboards only when they’re in use.

But by last November, only 250 schools out of 4,200 had worked with the Sustainable Energy Authority of Ireland. While many are part of the green schools scheme, thousands of schools still waste energy and money.

Take health, another big spender. The Health Service Executive estimates energy costs in hospitals, health centres and other facilities at €85 million a year. Since 2010, they’ve promised to sign a contract with an energy management company to implement a national strategy to cut these costs – meaning at least €20 million extra a year for vital services. But there’s no contract and no national strategy – while many hospital waiting rooms are like saunas.

Of course, some individual hospitals have made big strides on energy costs. But overall progress is slow and piecemeal, and Minister for Health James Reilly has never publicly encouraged health service managers to get involved in energy efficiency – never mind requiring all health facilities to do so.

These are just a few examples of an issue that deserves media scrutiny and debate. Energy costs are rising; public sector energy use rose 32 per cent in 1990-2007; and where no action is taken, it continues to rise.

The National Energy Efficiency Action Plan, the Government’s updated plan, is big on aspirations but weaker on specifics. For example, it says that “we will introduce a series of obligations on public sector bodies to address consumption, procurement and reporting of energy use”, but does not mention when. It announces a cross-departmental group to monitor action, but fails to say which departments will be involved.


Political go-slow
Croke Park II, disability cuts, politicians’ expenses – every week there’s controversy on how to save public money, whether €10,000 or €1 billion. So why the political silence and go-slow on saving €120 million in energy costs by 2015, and €200 million by 2020?


Duncan Stewart is an award-winning architect, environmentalist and broadcaster