It’s a willow, but what kind is hard to say 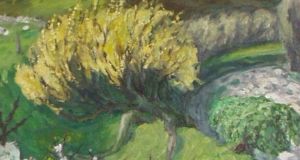 Down by the sally garden: the willow in spring. Illustration: Michael Viney

A blaze of golden yellow halfway down the garden proclaims an invader to our small estate, where a self-sown goat willow, Salix caprea , offers glorious catkins to the spring.

Others of its kind light up my morning march, leaning from the banks of streams beyond the snowy sparkle of whitethorn. These are all male willow catkins, despite the feminine flourish of the pollen: a twig or two, bracing narcissi in a vase, spread the table with gold dust.

The new trespasser more than earns its niche. But the acre we came to had a willow of its own, couched in the hollow where the hill stream cuts through beside the house.

The tree is now quite huge, leaning big, mossy elbows on the opposite bank of the stream. In summer its canopy blots out the mountain from our windows; in winter it cradles the summit and the rise of the moon.

Being so big, it is probably some class of white willow, Salix alba . I am allowed to be that vague, as the hybridisation of willows in Ireland is botanically remarkable. The old Webb’s Irish Flora , everyday bible of Irish botanists, detailed 15 species, most of them native to the island but some half-dozen introduced.

Triple hybrids
The new edition, updated in 2012, adds no more species but has plenty to say about how difficult it has become to tell one willow from another. John Parnell and Tom Curtis write that 18 hybrids have now been recorded in Ireland, with probably more to come. Even triple hybrids are known, “but it is even more difficult to determine their parentage”.

Our big white willow should have leaves made silvery green by a coating of silky white hairs. I remember a breathtaking tree of such pure heritage beside a river in Leitrim, a county made especially beautiful by its riparian willows in spring. Our tree’s leaves are bald and dull, but, hybrid or no, it has every ambition to spread its genes. Its winged seeds will float in a feathery blizzard for days and then spring up from every outdoor flower pot or root stubbornly into crevices in paths or walls.

The Salicaceae evolved for the cool moist soils of the northern hemisphere, into the High Arctic, where I walked on its catkins in a long-past July.

In Ireland it was one of the first plants to colonise the postglacial tundra; it survives in prostrate form now on coastal mountainsides and in the hollows of dunes.

The late, great naturalist Frank Mitchell wrote of kneeling at a seam of silt at Ashleam Bay, in Achill, to pick out 5,000 little fossilised leaves for radiocarbon dating – it was 11,000 years since they grew.

The native species accumulated by this island (goat, grey, bay, eared, purple, sally are the commonest) enriched our early ecosystems through their roots, stabilising the banks of streams (and thus making holts for otters and hideaways for fish), and through their insect populations – perhaps 250 species – and the birds that feed on them.

For people it was their infinite suppleness and durability that brought the “sallies” to so many farmsteads. (Just push a live stick two-thirds deep into a soggy spot, and within a few years, a bush!)

Along with the native sally came others from Britain: osier, crack willow, even the white willow that grew into our big tree. They were all planted for their use in thatching, wattle-walling and every kind of basket, from the potato platter to the creel of bog and currach.

Today willow achieves value for its potential in “bioenergy”, rivalling miscanthus grass as a perennial crop and coppiced every three years for woodchip boilers. There’s a grant of up to €1,300 per hectare towards the cost of establishing the plantation, and a whole range of new willow varieties has been developed especially for the industry.

Biomass
“Genetic improvement” of willows for biomass, breeding for pest resistance and to suit a wider range of environments and future climates, has been pursued in Sweden and the UK for decades.

More than 20 new species now include “exotic equivalents” of the goat willow and the tall osier, Salix viminalis , common on Irish roadsides and riverbanks, and each year sees another one or two new varieties.

Teagasc has published an identification guide to the willows now on offer, with uplifting names like Beagle, Endeavour, Resolution, Advance, Endurance. It specifies their promised yields, calorific value, shoots per stool and stem thickness at a metre tall. Endeavour, it persuades, is denser, drier and has the most thermal calories of all, so that its wood chips will take up less storage space and burn for longer.

What all this will do for telling apart the wayside willows of the future I have no idea.