Government to treble the rate of schools divestment 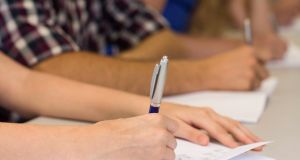 The Department of Education has set a target of trebling the rate of transfer of Catholic-run schools to non-denominational patrons. File photograph: Getty Images/iStockphoto

The Department of Education has set a target of trebling the rate of transfer of Catholic-run schools to non-denominational patrons amid criticism over the slow pace of divestment.

The 2012 report of the Forum on Patronage and Pluralism identified an initial group of 28 areas deemed to have sufficient demand for greater choice of school patronage, and although Educate Together was chosen as the preferred operator of divested schools in 25 of these areas, it has only opened schools in eight of them.

“To still have 17 left of 25 four years later is an indication of the speed of progress. It’s going slower than we hoped but it is progressing,” Educate Together chief executive Paul Rowe told The Irish Times.

Alluding to the target of 400 non-denominational schools at all levels nationwide by 2030, a spokesman for the Department of Education said it was redoubling efforts to achieve this aim following a sluggish start.

“That is a highly ambitious target, and represents more than a trebling of the current rate of transfer of Catholic schools to multidenominational patrons.

“Minister Bruton has articulated a strategy for how he plans to deliver on that, and he has a strong record of implementation.”

The department has said that 10 schools have changed patronage under the scheme so far, but observers have questioned the use of the term “divestment” in relation to some of these changeovers.

Others have involved the handover of empty school buildings by Catholic dioceses, or the opening of temporary Educate Together facilities while properties are being renovated, as is the case with the Mayo County Council-owned Marsh House site in Castlebar.

The Catholic Church was due to hand over its Burren National School building outside the town to Educate Together last September, but the property was deemed unfit for purpose.

A subsequent application to convert the 16th-century Marsh House to an Educate Together school was appealed to An Bórd Pleanála.

One appellant, Independent councillor Frank Durcan, accused Educate Together of being an “elitist” organisation. Mr Rowe called his comments “inaccurate”.

“The comment that Educate Together is elitist is quite extraordinary given the fact that [it] is the only education provider in Ireland which is legally bound to offer schools which provide access to children irrespective of their cultural or religious backgrounds,” he said.

The latest round of divestments and new builds means there are now 81 primary and nine secondary schools run by Educate Together.

About 90 per cent of primary schools remain under the patronage of the Catholic Church.