About 1,000 residents in Williamstown affected by contaminated water supply 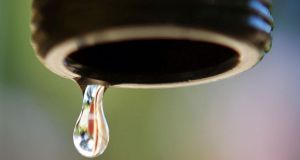 A contaminated water supply in Co Galway could affect supply to about 1,000 people for two years. Photographer: Ian Waldie/Bloomberg.

Irish Water and local officials have been urged to “bang heads together” to find a quick solution to a contaminated water supply in Co Galway which could affect about 1,000 people for two years.

A boil water notice was issued to residents of Williamstown in late October and is likely to remain in place until the end of 2016, when an extension to a separate water scheme into the area is expected to be completed.

Locals have been told to boil their water before using it for drinking, food preparation and doing things like brushing their teeth.

Independent TD Michael Fitzmaurice said Irish Water should have a back-up water treatment plan in place so as to avoid such situations arising.

He said there were a number of different water schemes in the area and he saw no reason why Williamstown could not access one of these on a temporary basis while the difficulties are being addressed.

Officials should “bang heads together” to come to a solution as it was “crazy” to think Williamstown residents could be on a boil water notice for up to two years, Mr Fitzmaurice said.

Irish Water said it was examining the possibility of a temporary solution being introduced.

“All temporary solutions are bespoke. They have to be designed, built, tested and validated,” a spokesman said, adding that such measures were not always possible as they depended upon the quality of the water source.

Mr Fitzmaurice said many people in Williamstown were annoyed at the fact they were not immediately made aware of the boil water notice being introduced and that lessons needed to be learned from the incident when it came to communicating such issues to the public.

He said somebody had now been appointed to liaise with the community.

Irish Water said it hoped to arrange a meeting with local elected representatives and stakeholders in the next five to seven days.

An extension of the Lough Mask regional scheme, which already supplies parts of Co Mayo, is to be used as the solution to the problem.

The scheme has to date been extended as far as Ballyhaunis, Co Mayo which is about 20km from Williamstown, but the remaining works are unlikely to be completed until the end of 2016.