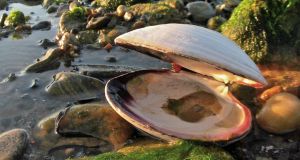 On Irish shores: a quahog like the one that Dixie Collins found in Co Clare. Photograph: Christopher Seufert/Getty 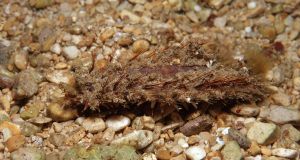 On Irish shores: a sea mouse similar to the one Martha Holmes found. Photograph: Reinhard Dirscher/Getty

I was walking on Dollymount beach after all the storms when I came what could be a giant isopod or a sea mouse. He was about six or seven inches long.
Martha Holmes
Clontarf, Dublin

It is the underside of a sea mouse, Aphrodita aculeata, from your photograph. Its top is covered with bristles. It is a polychaete, a scale worm.

I regularly beachcomb on the strands and shores around Loop Head peninsula. I found the shell of a bivalve, about 11cm wide, on the Shannon Estuary side at Querrin.
Dixie Collins
Kilkee, Co Clare

It is a an ocean quahog, ‘Arctica islandica’, an edible clam. There are commercial fisheries for them in North America, Iceland and Norway. One was the oldest known animal, at 507 years, when it died, in 2006. They live in the sand from below low water to 500m. They grow very slowly; this one could be at least 100 years old.

A first pair of redwings were spotted among a flock of mistle thrushes on January 10th.
Tom Curtis
Ringsend, Dublin

Ethna Viney welcomes observations and photographs at Thalla- bawn, Louisburgh, Co Mayo, or by email at viney@anu.ie. Please include a postal address