EPA rejects claims it is ‘answerable to no one’

‘The Environmental Protection Agency is the watchdog that hardly ever barks,’ says Labour Senator John Whelan 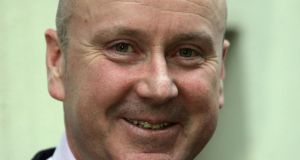 The Labour Party’s Seanad spokesman on energy, Senator John Whelan, claimed the EPA was ‘answerable to no one’. Photograph: Eric Luke

The Environmental Protection Agency (EPA) has vigorously defended itself against charges by Labour Senator John Whelan that it operates a “lax regime of light touch and self-regulation” in dealing with pollution and is “answerable to no one”.

In a statement, the EPA said it took its responsibility for the licensing of waste treatment facilities “most seriously” to ensure they do not endanger human health or the environment, and it “utterly rejects recent allegations and criticisms” made by Mr Whelan.

The Labour Party’s Seanad spokesman on energy claimed the EPA was “not accountable to the Minister for the Environment, the Department of the Environment, Dáil or Seanad. It is one thing to be independent; it is another entirely to be answerable to no one.”

He said: “The culture of the EPA is laissez-faire, a lax regime of light touch and self-regulation. This is . . . far from achieving ‘a rigorous enforcement regime’, as explicitly set out in Government policy.

“The EPA is the watchdog that hardly ever barks, let alone bites. Its brief to protect the environment and public health is hardly fulfilled as it sees no evil, hears no evil and speaks no evil; its so-called inspections are little more than well-announced tyre-kicking exercises.”

Mr Whelan cited the Enva facility, in Clonminam Industrial Estate, Portlaoise, which recycles 20,000 tonnes of waste oil annually. Although the EPA said it was “largely compliant with its licence”, a senior EPA inspector said he was “extremely concerned” about it.

The senator noted an EPA statement that Enva’s compliance had been “continually assessed and enforced . . . through audits, inspections and monitoring”, but said only one air-quality sample had been taken “ever”, and the results of it were withheld. “It remains my position that [Enva] continues to be responsible for unlicensed and unregulated open-vent process emissions,” he said.

The EPA said Enva has held a waste licence for its Portlaoise plant since 2004 and the agency was “satisfied that the activities undertaken on the site do not pose a risk to local residents, to health or to the environment”.