Countries to indicate their ‘contributions’ to cutting emissions in early 2015 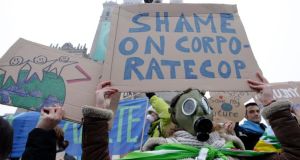 The UN’s 19th climate change conference in Warsaw narrowly avoided collapse at the weekend after marathon talks produced a compromise deal that optimists believe is “just enough” to pave the way for an international agreement in Paris in two years’ time.

Amid scenes of high drama at plenary sessions, two-hour “huddles” involving key players and deep divisions between rich and poor nations, bleary-eyed delegates from more than 190 countries who had been negotiating through the night finally agreed to move the process forward.

Although nobody was entirely satisfied with the outcome, it was agreed that all countries would indicate what “contributions” they would make to cut greenhouse gas emissions in advance of the Paris conference, so the adequacy of their efforts could be examined by others.

Both the EU and the US pressed for a firm timetable for countries to “place their cards on the table” in order to avoid a repetition in Paris of the chaotic Copenhagen summit in 2009, which was attended by more than 120 heads of state or government – many of them ill-prepared.

The Warsaw meeting also agreed to establish a “loss and damage mechanism” to help poorer countries cope with the consequences of global warming, as well as provide “increasing levels” of aid for adaptation and a set of rules to reduce deforestation and degradation of tropical rainforests.

Climate aid
At the Copenhagen summit, developed countries pledged to provide climate aid of $100 billion per year after 2020 – 10 times the amount given annually from 2010 to 2012 – but in Warsaw they were not prepared to set an intermediate target showing how this could be achieved.

“We have seen essential progress. But let us again be clear that we are witnessing ever more frequent extreme weather events, and the poor and vulnerable are already paying the price,” said UN climate chief Christiana Figueres. “Now governments . . . must go go back to do their homework.”

European commissioner for climate action Connie Hedegaard said the Warsaw conference, which ran for two weeks, showed “how challenging the way to an ambitious result in Paris will be”. “But the last hours also showed that we are capable of moving forward.”

One of the sticking points was a renewed insistence by China, India, Brazil and South Africa that only developed countries would have to make commitments to cut their emissions – a position described as “astonishing” by US climate envoy Todd Stern.

The EU also insisted that “all countries must contribute to the future reduction efforts”, not just those subscribing to the UN’s Kyoto Protocol, which now account for only 15 per cent of global emissions. The eventual compromise was to substitute “contributions” for “commitments” in the draft text.

Referring to the requirement for all countries to table their contributions well in advance of the Paris conference, if possible by early 2015, Danish environment minister Martin Lidegaard commented: “If we don’t do our homework before we meet, then we won’t get an agreement when we meet.”

Jennifer Morgan, director of the Washington-based World Resources Institute’s climate and energy programme, said: “Country representatives now need to return home to make significant progress on their work-plans and national offers that can become the backbone of a new climate agreement.”

But Lord Nicholas Stern, author of the British government’s seminal 2006 report on the economics of climate change, said the outcome in Warsaw was “simply inadequate” when compared to the scale and urgency of the risks associated with a failure to curb the growth in emissions – now at record levels.

Alden Meyer, veteran observer from the Union of Concerned Scientists, said: “There are some very difficult political issues that will need to be addressed over the next two years if we are going to have a successful outcome.”

Frustrating
Jean-Pascal van Ypersele, vice-chair of the UN’s Intergovernmental Panel on Climate Change, expressed the hope that Warsaw would not be portrayed as a complete failure “even if, as often, the slow speed of these negotiations is very frustrating, as seen from a climate scientist perspective”.

But Martin Kaiser, head of the Greenpeace delegation, which was among those who walked out of the conference last Thursday, said the outcome “sends a clear signal that increased civil disobedience against new coal plants and oil rigs is needed to prevent catastrophic climate change”.

Emissions
Countries agreed to announce plans for curbing greenhouse gas emissions “well in advance” of the crucial summit in Paris in December 2015 and “by the first quarter of 2015 for those in a position to do so”.

Finance
Despite a 2009 promise of $100 billion per year in climate aid for poor countries from 2020, no mid-term target was set. The text merely urges developed countries to provide “increasing levels” of aid.

Deforestation
Agreement was reached on REDD+, a framework to tackle deforestation in tropical countries, with the new Green Climate Fund playing a key role in channelling finance for projects to protect rainforests.

Pubs not to reopen and restrictions to remain on all gatherings , Cabinet decides 18:39
Court approves €35,000 payment to family of infant who died hours after birth 18:36
Former TV presenter dies after car enters water in Co Down 18:02
Ireland needs to move to ‘zero-Covid’ policy to avoid catastrophe, scientists say 17:48
Coronavirus: 45 new cases but no further deaths reported in the State 17:46