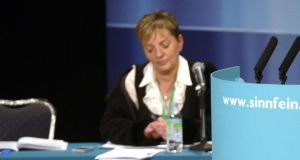 Coillte and the Forest Service have been called upon to clarify the extent of a fungal disease among trees at the Gougane Barra Forest Park in Co Cork after an expert in plant ecology questioned the decision to fell some 16,000 trees in a bid to contain the disease.

Sinn Féin Ireland South European elections candidate, Liadh Ní Riada, revealed she had been contacted by an expert in plant ecology, who wished to remain anonymous, but who had series concerns over the extensive felling of Japanese larch proposed for Gougane Barra.

“I recognise that Coillte do a good job and I’m not disputing that, but 16,000 seems like a lot of trees and although I was contacted anonymously by this person, they do raise interesting questions and I would like Coillte or the Forest Service to clarify matters,” said Ms Ní Riada.

Ms Ní Riada’s source said they had visited Gougane Barra over Christmas and despite “several days of probing”, had failed to find any incidence of the fungal disease, Phytophthora ramorum, which involves a rusty red, blood like flux seeping down the outer bark.

The source also questioned how such an isolated area as Gougane could become so quickly infected, and found it puzzling that numerous new plantations of larch all over the country that were planted from potentially infected imported stock had not become infected.

The source expressed concern that, if the disease was present in some isolated corner of Gougane, Coillte had not moved immediately to seal off and quarantine the area until the disease was under control, rather than opting to fell 16,000 trees.

Contacted by The Irish Times, the Forest Service, which is attached to the Department of Agriculture, pointed out that symptoms of Phytophthora ramorum are difficult to detect at this time of year and are easier to spot during the summer months, when larch is in leaf.

“Confirmation of the disease is through laboratory testing. As the symptoms are often high up in the [trees’] crowns, the department conducts aerial surveys with the assistance of the Air Corps during the summer to aid in surveying for the disease, in addition to ground surveys.”

The Forest Service also said in its statement the disease can be dispersed by rain, mists and air currents, and that these are the main pathways for the spread of the disease in larch trees. Gougane is also not far from other locations where the disease has been detected.

“So far, most of the forestry findings of the disease have been in relatively mature larch stands and there is no suspicion of a link to importation of infected larch plants given the age of these mature larch stands,” the service said.

“Forestry inspectors are satisfied that the area identified for felling is necessary to aid in the control of the disease. Experience from other sites in Ireland has indicated that the disease can spread through larch stands quite quickly,” it said.

“The decision to issue a disposal notice in relation to areas of larch at Gougane Barra was not taken lightly. Following on-site inspection by specialist forestry inspectors, samples were taken from the site and analysed in two laboratories which returned positive results for the disease.”