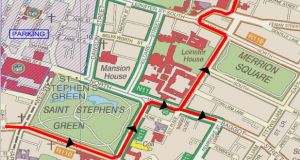 A map showing a new Dublin city traffic flow scheme (marked in red) to cater for the utility works for Luas Cross City. The new system will be in place by late October or early November.

The biggest traffic changes on St Stephen’s Green since the Luas Green Line was constructed almost a decade ago, are to come into force in two month’s time.

New traffic routes are being introduced to divert cars and buses away from the site of the Cross City Luas line ahead of the start of work to lay the tracks.

The new Luas will connect the existing Green and Red lines through the city centre before continuing north to the new DIT campus planned for Grangegorman, then onto Phibsborough and Cabra where it will terminate at the Irish Rail station at Broombridge.

The first will be a right hand turn from St Stephen’s Green East on to Merrion Row. Currently traffic heading north on the east side of the green must turn left passing in front of the Shelbourne Hotel. Motorists who want to access Merrion Row to head for Baggot Street or Merrion Square must currently take a right onto Dawson Street and use either Molesworth Street or Nassau Street to loop back around to the green and on Merrion Row.

The second major change is at the diagonally opposite corner of the green with the creation of a new turn from St Stephen’s Green South onto the west side of the green. Traffic taking this new turn will cross the existing Luas line and then run parallel with the line as far as York Street. This turn allows motorists access to the Royal College of Surgeons and St Stephen’s Green car parks, or they can continue on to Mercer Street and take Noel Purcell Walk to access Drury Street and the car parks in that area. This new turn should also be in place by early November.

The changes, which will be permanent, provide additional routes for motorists and no routes are being closed off to traffic at this stage, Brendan O’Brien of the council’s traffic department said.

“We are not banning traffic from any current route along the green, or closing off any streets, but with all the construction activity we want to give people an alternative to being in that area.”

Restrictions and traffic bans will however come into force from next year onwards, when the left turn from Dawson Street to Nassau Street, used by buses and for deliveries at certain times, will be eliminated.

“Dawson Street will be quite problematic. When the major work starts it won’t be able to accommodate much traffic,” said Mr O’Brien

In anticipation of the laying of the line down Dawson Street, Kildare Street, currently one way heading south only, will be reconfigured over the next two months into a two-way street. Buses will be able to go both ways for the full length of the street, but cars heading north will have to turn into Molesworth Street.

In addition to these major changes the council will be reconfiguring traffic lanes, junctions and traffic islands and removing some car parking spaces from the green. It will also provide cycle lanes and widen footpaths.

Traffic changes required onwards from Nassau Street to College Green, Westmoreland Street and O’Connell Street will be the subject of discussions with the contractors when they are appointed Mr O’Brien said.

However, he said it was likely some extension of the Bus Gate, which sees cars banned from travelling north through College Green at peak times, would be required.