Another Life: Autumn and the sound of several leaves falling

Autumn in these islands is becoming a blurred and hesitant season, unmarked by anything so distinct as ‘the fall’ 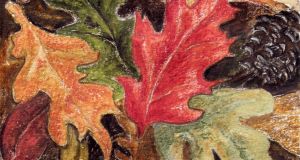 This summer has demonstrated, once again, the very different regimes of weather in Britain and Ireland

On one of those still, Scandinavian mornings I had time to watch leaves falling (as is only proper at my age). They were floating from one of the poplar trees planted a long time ago in the sandy bank of the stream. They took their time, just one every minute or two, spinning down vertically, finally shining yellow in an artful flicker of light.

I cast around for some suitably Zen-like moment of reflection – you remember Zen, when we were young; now it’s mindfulness – but I could only come up with remembering the first “s” in “abscission”, which could win you a pub quiz some time. This is the word (same Latin root as “scissors“) for the tree’s act of dropping a leaf and sealing off the scar – putting out the rubbish, as has been said.

The leaf holds waste chemicals involved in the summer’s growth, helping green chlorophyll to flourish in the sun, making sugar for energy and growth. As growth slows and chlorophyll fades, the yellows of carotenes and flavonoids and the purples and reds of anthocyanins get their own brief revelation, so pleasing to the human eye.

The poplars seem to have jumped the gun, for most of the acre’s trees, as I write, are resolutely greenish and more or less entire; only the beech has begun to gild its leaf tips. The few dry days and coldish nights may trigger autumn on time after all.

Looking at the great overburden of leaves yet to fall on this one tiny plot of land, I think of recent news, from 30 years of satellite observations, of a progressive and visible greening of temperate land, consistent with “forcing” by greenhouse gases. This first evidence of change at human hands is quite distinct, it seems, from any change in the geographic range or leafing of trees. (You can read a summary of the research, from Nature Climate Change, at iti.ms/2edHy6k.)

The extra greening, I must suppose, is a burgeoning of existing trees and bushes rather than new afforestation. But I look forward to learning more about the timing of autumn. In October 2015 Nasa satellites captured the smouldering glow of fall colour in forests around the Great Lakes and in New England. (You can see photographs at iti.ms/2equtUV.) Similar Nasa photographs in 2014 found a southward sweep of leaf colour showing up some weeks earlier.

Autumn in these islands, however, is becoming a blurred and hesitant season, unmarked by anything so distinct as “the fall”. In the northern hemisphere deciduous trees have evolved to shed their leaves ahead of destructive winter frosts, thus enabling abscission to take place. As climate warms how fast is this likely to change?

We have already seen the advance of spring, bringing earlier budburst to winter’s bare branches. But in autumn, says the Irish Committee on Climate Change, the signal is less clear.

Although we might expect milder autumns to leave foliage on trees for longer, temperature is not the main driving force for leaf fall. Day length also regulates abscission, and as most trees, as the ICCC finds, are not dropping their leaves later, “we can say that the length of the growing season . . . is increasing mainly due to their earlier appearance”. (This is from the sixth of the committee’s scientific statements, PDFs of which are at iti.ms/2edJQCb.)

Such conclusions are drawn from phenology, the record of the dates of significant events in nature’s annual life cycles. Those of the Irish Phenology Network show that the island’s growing season has lengthened by up to three weeks for trees spread throughout the country. Since 2005 Nature’s Calendar Ireland has also been recruiting “citizen scientists” in building a wider phenological database.

In the UK a similar Nature’s Calendar network has earlier records to play with, including those for autumn “tree bare” dates from 1938 to 1946. A commentary on autumn phenology in British Wildlife in 2009 showed that “tree bare” dates had been delayed by 10 to 18 days for ash, beech, horse chestnut and pedunculate oak. Looking ahead, its authors, Tim Sparks and Richard Smithers, predicted delays of leaf-fall dates for Britain’s commonest trees of some six days for every one-degree rise in temperature.

This summer has demonstrated, once again, the very different regimes of weather in Britain and Ireland. My 92-year-old brother, mowing his lawn on the Sussex coast, reported day after day of blazing sunshine, while Co Mayo suffered week after week of Labradorian gloom.

The phenology of trees seems bound to differ substantially between the two islands, as strong regional contrasts in weather harden into long-term climate change. I frankly can’t wait for the leaves to fall, giving us back the view across the bay, the mountain’s peak, the rising through bare branches of autumn’s magical moons.