To Be Honest: Don’t force our children to use iPads

To Be Honest: A parent writes about the unwelcome spread of technological consumerism to the classroom 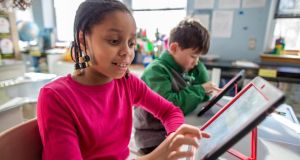 Worth the investment?: there is no benefit in leaving school highly proficient at using an iPad. Photograph: Aram Boghosian/Boston Globe via Getty

My daughter is due to start secondary school in September. We have recently been informed about a proposed introduction of iPads at the school for students in the Junior Cert cycle. I have many issues with this, and I think it represents problems for many Irish parents.

I have fought hard in a country obsessed with technological consumerism to keep my and my family’s use of technology to a minimum.

My daughter, much to her chagrin, was not allowed a Nintendo DS, unlike all of her contemporaries. It was very hard to impose this stricture on her, as a lot of the children, and some of the adults, clearly felt this was a distinct lack in my daughter’s life and were not shy in making her feel excluded. But I felt at that stage in her educational development (age eight to nine) it was far more important that her reading skills were developed.

I believe ease of use of gadgets such as Nintendos and iPads is at odds with the concept of learning successfully, which requires effort to have effect.

Then there’s Apple. The school has opted for iPads as opposed to a choice of tablet, as it says it would not be able to support multiple devices.

First, an iPad is just a fancy gadget. If schools want to use modern technology then students should surely be using laptops or PCs. There is no benefit in leaving school highly proficient at using an iPad.

Second, I object to the technological behemoth that is Apple and am uncomfortable with its manufacturing policies internationally. I do not want and have never wanted any of their products in my house, and now I am told I do not have a choice. I feel violated by this attack on my rights as a parent to ensure my child has a good education.

Then there’s the cost to parents, to support a form of learning that has no demonstrable learning benefits. Apparently it will cost €800 for the iPad and course material. This is on top of at least €250 for the uniforms they insist on in this particular school. We have been told the cost of downloading books for the iPad is approximately the same as physical books, on top of the cost of the device, with the additional downside that the licence to download the books is only for the duration of the Junior Cert, in this case.

In other words you pay the same but you do not even own the books. This has serious financial implications for parents as books cannot be passed on. It also rules out the possibility of buying secondhand books.

In its letter to us, the school says a member of the credit union will be on hand for advice – parents being told they must get into debt to fund their child’s education – but don’t worry, we’ll make it easy for you.

I am sure other parents also object to being forced to follow the iPad yellow brick road.


This column is intended to give a voice, anonymously, to those within the education system. Contributions welcome to educationdesk@irishtimes.com