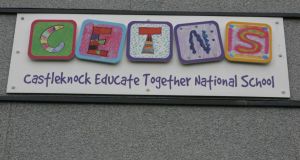 The aim of the divestment process had been to transfer patronage from the Catholic Church to other patrons to create more diversity. Photograph: Cyril Byrne/The Irish Times

Four new multidenominational primary schools are scheduled to open next September under the latest round of patronage “divestment”.

Three of the schools – in Tuam, Co Galway; New Ross, Co Wexford; and Castlebar, Co Mayo – are to be run by Educate Together.

The fourth school in Birr, Co Offaly, will be a Gaelscoil operating under the patronage of An Foras Pátrúnachta.

The allocations are based on parents’ preferences expressed through surveys held in 2012 in 43 areas following the Forum on Patronage and Pluralism.

The aim of the divestment process had been to transfer patronage from the Catholic Church – which controls more than 90 per cent of primary schools – to other patrons to create more diversity.

To date, however, the church has yet to transfer any of its schools to a new patron, albeit it has amalgamated two schools to create a vacant premises for Educate Together in Dublin.

In the latest round of divestment, it plans to surrender the premises of Burren National School which closed in Castlebar more than 20 years ago.

In contrast, the Church of Ireland has transferred two of its schools to new patrons, one in Ballina, Co Mayo, and the other in Mallow, Co Cork.

Announcing the latest allocations, Minister for Education and Skills Jan O’Sullivan said: “This development will bring to nine the number of new schools opened under the patronage divesting process.

“I am particularly pleased that the Catholic Church has been able to offer an actual school building for immediate use by an alternative patron in the case of Castlebar.”

Educate Together also welcomed the announcement, saying there was a clear demand for educational diversity in these and other areas.

While parents are invited to enrol their children for next September, both the department and Educate Together said that a number of issues needed to be finalised.

Work needs to take place in Castlebar to bring the vacated school up to standard, and permanent accommodation has yet to be found in Tuam and New Ross.

Ms O’Sullivan has previously criticised the slow pace of progress in divestment, but she said: “The engagement with patrons is very positive and I thank them for the openness of their approach. I am sure that with the co-operation of all concerned and with the support of my department, further progress can be achieved for 2016 and beyond.”

Educate Together runs 74 primary schools nationwide, or 2 per cent of the schools in the Republic, compared to almost 3,000 Catholic primary schools.

At a meeting with Taoiseach Enda Kenny this week, Atheist Ireland called for a radical overhaul of school patronage, arguing that the number of atheists in Ireland was as high as 700,000. This was based on Census figures and the Catholic Church’s own estimate that up to 10 per cent of self-proclaimed Catholics do not believe in God.