Minister for Education asked to intervene in row over college merger 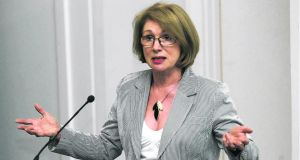 Education Minister Jan O’Sullivan has been asked to intervene in the row over a planned merger between St Angela’s College Sligo and NUI Galway.

Academic staff at St Angela’s are balloting this week on industrial action up to and including a strike. They are citing a number of concerns including failure to engage with union representatives over full integration with NUIG. The TUI has described the plan to change the job title of many staff from lecturer to university teacher as a red-line issue.

Following the unanimous decision by staff at the Sligo college to ballot for industrial action, a spokesperson for NUIG said that there would be engagement with unions at a later stage in the process, and that staff were protected by EU Transfer of Undertakings Regulations (TUPE).

In a statement, NUIG said that an underlying challenge for all concerned with preparations for the merger, due to take place next September, was “an understandable preference on the part of many staff members in St Angela’s College that the college would continue to operate unchanged”.

But the Government’s National Strategy for Higher Education required a reconfiguration of the higher education sector “and NUI Galway is committed to implementing that strategy”.

Staff at St Angela’s have criticised what they see as a lack of consultation with their union representatives in the run-up to integration.

Local Fianna Fáil senator Marc MacSharry said the proposal to “downgrade” staff from lecturer to teacher was “discriminatory and elitist” and would have an adverse impact on the promotional paths open to staff.

He appealed to the Minister for Education to intervene. A spokesperson for the Minister said it was a matter between the institutions and staff.

NUIG said it has two parallel grades of academic contract, university teacher and lecturer, and that the salary scales and promotion tracks of both grades were identical.