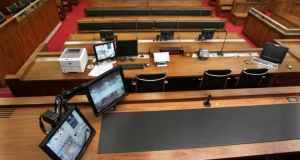 THREE MEN have been charged in connection with an incident in Limerick where it was alleged a woman was abducted and held captive at a flat in the city for almost a week.

Details of the six day ordeal emerged at a bail hearing at Limerick District Court yesterday where one of the men was charged with assaulting the woman causing her harm earlier this month.

Two other men are charged with falsely imprisoning the woman — who is in her twenties — in the Thomondgate area of Limerick on May 3rd last.

They were released on bail and are due to appear before court again in July.

It is alleged the woman, who is from the southside of the city, was pulled from a taxi by a number of men and bundled into another vehicle before being taken to a flat near Limerick city centre.

Gardai are investigating allegations that the woman was then kept against her will at the flat for six days during which time she was beaten, including on one occasion with a shovel.

One of the three men, who appeared before Limerick Court yesterday, is accused of assaulting the woman causing her harm.

It is alleged that offence took place at the flat where she was being held captive on May 3rd, the day she was abducted.

The court heard the woman made a complaint to Gardai the day after she was released from captivity.

Investigating gardai have seized a car as part of their inquiries and they are also viewing CCTV footage at the location where the woman was allegedly abducted from.

Investigating gardai arrested two men last weekend at a hotel on the outskirts of Dublin and one man was arrested in Limerick.

During yesterday’s bail application at Limerick District Court, Det Garda Keith Harmon said it is “highly likely” that further charges will be brought in the case which, he added was likely to proceed before the Central Criminal Court.

He said there is strong evidence in the case including statements from independent witnesses which corroborate some of the allegations.

Defence solicitor John Devane said his client was “not a flight risk” and was willing to abide by any conditions imposed by the court including “signing on three times a day” if necessary.

However, Judge Eugene O’Kelly said he was not satisfied to grant bail and he remanded the accused in custody until May 21st, next.

Investigations are continuing and a file is being prepared for the Director of Public Prosecutions.