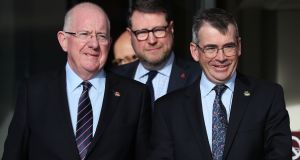 The increased availability of firearms on the dark web and the radicalisation of people by terrorist groups online could result in so-called “lone wolf” terrorist attacks in Ireland by attackers previously unknown to law enforcement, a new all-Ireland security threat assessment has warned.

And the report, produced jointly by the Garda and PSNI, has also said the “overall operation” of the Common Travel Area between Britain and Ireland may have to change because of the security risks associated with Brexit.

The new document outlines a worrying picture for the island of Ireland in relation to current and possibly future threats from criminal and terrorist elements.

“Increasing radicalisation of people, directly and online, by local and international terrorist groups,” it says, “could also see the possibility of the phenomenon known as the ‘lone wolf’ – persons who have not [come] to the attention of law enforcement previously.

“The increased availability and opportunity to purchase a firearm online could be opportunistic and, potentially, fatal.”

It adds that the 360km Irish Border can be exploited by criminals, who can “easily pass across several hundred road crossings and a vastly higher number of unmarked crossings” to smuggle people, drugs, guns, fuel, alcohol, tobacco and other contraband.

The report also says travelling by sea from Ireland to mainland Britain is often easier than through airports, which have enhanced security checks.

“Regardless of how the Border is maintained, it is likely that Northern Ireland could be seen as a possible weak point within the UK infrastructure by criminal groups that would seek to exploit this by trafficking commodities and people across the Border.”

Garda sources have told The Irish Times that because smuggling foreign nationals into Britain will become more lucrative after Brexit, there will need to be a whole range of security and immigration checks put in place for travel within the common travel area for the first time ever.

The new report said international gangs had already used the island of Ireland to stage marriages of convenience between men from outside the EU and women from some poorer EU countries. These gangs arranged marriages on both sides of the Border, provided false paperwork and even provided a fake “electronic relationship footprint”.

This, according to sources, involves creating bogus social media posts appearing to mark the development of a real romantic relationship over time. Some 200 deportation orders had already been issued for men suspected of securing status to live and work in Ireland through marriages of convenience.

Another cross-Border investigation is under way into a scam involving empty trucks being driven from the North to the Republic, where they picked up Afghan nationals and drove them back to the North and on to Britain by ferry.

“Investigations are ongoing to establish how the Afghan nationals are getting into [the Republic] in the first place,” the report notes.

It further points to a scam in which “South Asian nationals have been exchanging cancelled UK drivers’ licences for valid Irish licences” and then applying for taxi licences in the Republic.

The threat assessment document, which emerged at a cross-border Garda-PSNI annual crime conference in Newcastle, Co Down, also notes the Republic had seen a higher number of “human-trafficking cases for the purposes of labour exploitation” in 2018, though specific numbers were not referenced.

It says burglary gangs operating in the Republic are now “highly forensically aware”.

Burglary gangs are targeting jewellery, cash, expensive cars and high-value goods. Jewellery stolen in the Republic is being brought to the UK and sold to a “a network of jewellers and cash for gold operators”.

There is intelligence, albeit limited, that organised gangs were also using drones to carry out surveillance when preparing their crimes. Some burglary gangs are specifically targeting Chinese and Indian victims in Ireland to steal cash and jewellery from them during their holiday periods.

The threat assessment also says cocaine consumption is probably already back to Celtic Tiger levels in the Republic.

In the illicit drugs market, criminals will benefit in the future from the increased use of the dark web.

Overall, “the improving economic resurgence in [the Republic] over the years has also led to a resurgence in demand for so-called party drugs, such as cocaine and MDMA”. If cocaine abuse is not back to the peak of 2007, “such a return is likely to occur soon”.

Crack cocaine is an increasing issue but not yet “on a national scale”. The greater Dublin area remains Ireland’s heroin black spot, though consumption of the drug fell slightly there between 2001 and 2014, during which time heroin consumption doubled outside Dublin.

While there are cross-Border links between drug gangs, foreign gangs are working seamlessly across the two jurisdictions, which they see as “a single marketplace”.