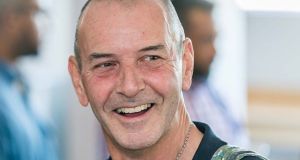 Irish charity worker John Curran (60), who was killed in Cape Town South Africa on Wednesday, was due to return to Ireland within the next two weeks having completed a contract with Mellon Educate, the Irish-based African development charity, in Capetown.

He had been director of education for the charity there since October 2016.

Mr Curran was stabbed to death in his city centre apartment in Cape Town, South African on Wednesday.

“Our forensic team has been at the scene of the crime gathering evidence and the body has been taken to the mortuary,” he said.

A murder case has been opened by the police but no arrests have been made yet, Captain October added.

Mr Curran, from Templeogue, had been founding principal of Good Shepherd national school at Churchtown in Dublin where he served for 16 years before early retirement in June 2005. A book of condolence has been opened in the foyer of the school.

David Ruddy, President of the IPPN said he had known Mr Curran for about 20 years.

“We are numbed and finding it very hard to process the information. Our hearts go out to his family, his very wide circle of friends, his colleagues and all who knew him.”

He continued: “We will greatly miss his wonderful sense of humour, his infectious laugh and his ability to lighten the most serious topic.We have been inundated with texts and messages from people. As so often in Ireland, people have to pass away before we look at their contribution.

“We are all indebted to him for all his work over many years, all of which was completely voluntary.”

Last January, Mr Curran brought the Western Cape minister for education and representatives of its department of education to an IPPN agm at City West in Dublin as part of a study of good school leadership practice.

On a visit to Mr Curran in South Africa last year, Mr Ruddy said he had seen “the remarkable work he was doing in the townships” where teachers from Ireland would visit him “with suitcases full of books and materials surplus to requirements at home”. It was part of ‘Teachers’ Blitz’ projects in 2017 and 2018 to build schools and schools’ infrastructure.

Mr Curran is survived by Liz and their children Darragh, Tríona and Donal, their partners Clodagh, Liam and Beck, and by six grandchildren.

His death is the second tragedy to befall the family in recent years.

In July 2010, Mr Curran’s 30-year-old son Eoin was drowned in New York while taking a sailing lesson at Long Island Sound when a sudden storm hit and he was thrown overboard.

A former first class BA mathematics student, who also held a Masters in computer science from Trinity College Dublin, Eoin Curran had been working as a software engineer with Google in New York where he had moved a couple of months previously.

At his son’s funeral service in New York, John Curran thanked people for supporting the family. “The tears and the hugs,” he said were “the simple things . . . that will help us to build the steps, build the stairs, to start living our lives again.”

He concluded the service with a rendition of the Thomas Moore lament, I Saw From The Beach.

Following the cremation, Eoin Curran’s ashes were placed in six gold pendants specially made by the family in his memory. In February 2013, it was reported that his sister Tríona was deeply upset when she lost the pendant around Dublin’s Fitzwilliam Square. To her immense relief it was found the following month.

Local TD, Minister for Culture, Heritage and the Gaeltacht Josepha Madigan expressed her sadness on hearing of Mr Curran’s death.

“John was well known in education circles in Dublin Rathdown and served the children of Churchtown well during his many years teaching at Good Shepherd NS,” she said.

“At a national level he was involved in numerous projects with IPPN over the years. I know he was held in high esteem by his former colleagues.”

She continued “his enthusiasm and energy was obvious to all and his legacy in the area of education is a significant one”.

“He will be sadly missed,” she said. “I am aware that John’s untimely death has come as a great shock to everyone who knew him. I wish the South African police well in their investigation into his passing.”

In a post on its website, the Good Shepherd school has referred to Mr Curran as “an innovative educator”.

“John’s vision and enthusiasm still influence our ethos and can be seen at work throughout our school today. We are proud to continue the work he began here in 1989.” It said “our thoughts and prayers are with John’s family at this incredibly difficult time.”