Pipe bomb in garden of Belfast house moved by resident 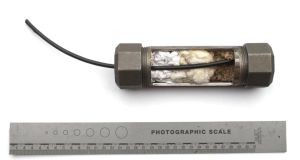 The interior of a pipe bomb device is revealed at a British Army Base at Ballykinler, Co Down, Northern Ireland. File photograph: British Army/Reuters

A pipe bomb found in the garden of a house in north Belfast was moved by a resident on Monday, police said.

It was discovered in Shore Crescent in the morning, PSNI Det Sgt Dolores Black said, and moved to nearby waste ground where it was examined by police and army technical officers (ATO).

Ms Black said: “A viable pipe bomb was made safe by ATO and has been seized for forensic examination. All cordons are now being lifted.

“We are keen to speak to anyone who witnessed the device being left or who has any information that could assist the police investigation.”

Man accused of sexually assaulting young girl denies he was ever alone with her 16:58
Supreme Court to hear State appeal over refugee marriage laws 16:55
Commuter communities being ‘sucked into Dublin’ - Howlin 16:52
Talks to resolve Limerick FC’s action against FAI to continue over weekend 15:55
Seven-and-a-half years jail for man found with €1.1m worth of drugs in ‘socks’ box 15:32