Man dies in shooting at wedding in Northern Ireland

Incident happened as bride was preparing to walk up the aisle, priest says 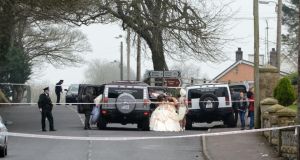 Members of a wedding party leave a church in Newtownbutler, Co Fermanagh after a shooting in the grounds of St Mary’s Catholic church. Photograph: Ronan McGrade/Pacemaker Press

A priest has described how he pleaded with a small group to stop fighting ahead of a wedding in Co Fermanagh only for their dispute to subsequently flare up again leading to the death of one of the men.

The man in his 60s died after he was shot shortly after 1 pm on Wednesday outside the Catholic Church of the Immaculate Conception in Newtownbutler, Co Fermanagh.

A second man aged in his 30s was also shot but his injuries are understood not to be life-threatening. A PSNI helicopter flew the seriously injured man to hospital where the man died.

The local parish priest, the Rev Michael King said he was preparing to conduct the wedding between a couple from two Traveller families, most of whom were from Dublin, Longford and Athlone. It was a small wedding with about 40 to 50 people attending.

“There was a disagreement before the bride came and it was in the car park of the church grounds. I don’t know what it was about,” Fr King told The Irish Times. He explained that the church was located beside St Mary’s primary school.

Two men in particular were involved in the altercation, added Fr King. “When I came down to the church they were arguing among themselves, and calling each other names. I went up and chatted to them and told them they were standing outside the school, and that in deference to the children who would be out for recreation to move away,” he said.

“I pleaded with them to stop and they did, but then it started again,” said Fr King.

He said he subsequently went inside the church to carry out the wedding. He said the bride was standing at the back of the church preparing to walk up the aisle when someone shouted, “There’s shots, there’s shots.”

“So I went outside and did not see any evidence of anybody being shot,” he continued. “Then I noticed two or three people running down the road where somebody had been shot. I saw him getting up again and I assumed everything was okay.”

He was told that two men were shot, one in the chest and the other in the leg while another man suffered a stab wound to the back of his hand.

Fr King said he helped arrange for the PSNI and an ambulance to be called. It was only about two hours later that he learned that one man died in the shooting.

After the incident it was decided to go ahead with the wedding. “I could do nothing else, because they (the families) were anxious to get this girl married,” he added.

Fr King said the bride was “a bit traumatised” but he told her to “take a few deep breaths” and reassured her that she was safe in the church.

It is understood that after the wedding the bride, groom, families and guests group left the scene and crossed the Border towards Co Cavan.

Local Ulster Unionist Party Assembly member Tom Elliott expressed his shock at the shooting. “It is horrific that a gun attack should take place anywhere, but when it happens in the grounds of a church and at a wedding it is even more sinister. There seems to be an element of people today for whom nothing is sacred,” he said.

“It is very worrying that certain people have access to firearms and willing to use them for any reason. There is a significant onus on police to ensure that these criminals are caught and that the courts ensure they are locked up for a long period,” added Mr Elliott.

Local Sinn Fein councillor Thomas O’Reilly said the wedding party and people in Newtownbutler were shocked and distraught at the shooting.