Less than 5% of cyber crime reported to gardaí 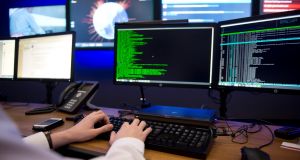 Less than 5 per cent of of cyber crime is reported to gardaí, a conference has heard.

Speaking at the conference Cyber Fraud in a Digital Age at University College Cork on Friday, Det Supt Mick Gubbins of the Garda Cyber Crime Bureau appealed to company owners and individuals to contact them when they find themselves under attack by criminals.

He said support services are ready and in place for persons impacted by cyber crime.

“Of the cyber-dependent crime, very little of that is reported. I would say it is less than 5 per cent. It is not just an Irish phenomenon. It is a European and global phenomenon. We would like to let them know that the guards have the ability to investigate cyber-dependent incidents.”

Det Supt Gubbins said one third of Irish and Northern Irish businesses have suffered a data security breach in the past year.

He says companies do not approach gardaí to report attacks on their systems, which prevents the authorities from sharing their experiences with the wider community.

Cyber crime costs almost 1 per cent of global income, with the money being redirected from legitimate businesses to organised crime structures, he said.

At a consumer level, Det Supt Gubbins said Irish people used to be very good at minding their own business. But in the modern age, people now document their whole lives on Facebook and Twitter.

“What you don’t realise is that you are giving information to the criminals to create a spear phishing campaign to do some more social engineering to get in to your circle of trust to get access. I am aware of a guy whose Gmail account was accessed, and criminals accessed his email to make a payment to a bank account. It is important to use different passwords at all times.”

Det Supt Gubbins said large numbers of people still fail to limit orders to reputable websites only when buying online. The lure of what looks like a good deal can make people lose their critical faculties, he says.

He said people are often unaware of how vulnerable they are. Even LED Christmas lights which are on wifi instead of Bluetooth can be a point of compromise to a home network.

Ronan Murphy, chief of cyber-security firm Smarttech 247, said the threat of cyber crime was growing at an “unprecedented” rate. He said Irish consumers and businesses needed to urgently increase their vigilance about their data, which is constantly under attack from what is now a $500 billion industry.