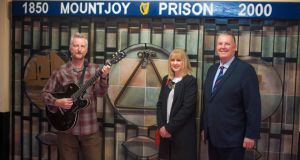 Three of the most prized guitars from the late Philip Chevron’s collection were yesterday bequeathed to the inmates of Mountjoy Prison in the first move of a new initiative that aims to use music to help rehabilitate prisoners.

The initiative, Jail Guitar Doors, was founded by English rock star and social justice activist Billy Bragg and has been implemented in more than 50 prisons in Britain, as well as all three in Northern Ireland.

At a ceremony in Mountjoy Prison yesterday, friends and family of Pogues guitarist Phil Chevron, who died last year from cancer, gathered to present three of his guitars to the music students at the jail.

Chevron’s sister, Deborah Blacoe, read a letter from President Michael D Higgins in which he said he was delighted to express his “support and appreciation” to Chevron and his family.

“Phil was a close friend for many years and his commitment to human rights – and in particular the rights of those deprived of their liberty – is well known and acknowledged,” he said. “Following the tragic loss of Phil at a young age, I can think of no more fitting a legacy than to have his guitars made available to the inmates at Mountjoy in this way. It is also particularly fitting that Billy Bragg is with you today to mark this handover. I have long been an admirer of the wonderful work of his Jail Guitar Doors initiative in the UK.”

Speaking after the presentation, Bragg stood to address a group of inmates. “I want to address the lads at the back who are going to be using these guitars,” he said. “This instrument is a key. It can help you change your life. I’ve been around the world – so has Phil Chevron – because of the doors this instrument opened. When we give these guitars today, they’re not here as a gift. They are here really as a challenge – as a challenge to take this opportunity to use this instrument to help you to turn your lives around.

“I spoke to Phil about this. He wanted to donate these guitars because he wanted you to get out of this place and never come back. So be sure, there are people outside who care about what happens to you and care what happens when you come out. They’re assembled here and Phil Chevron was one of them.”