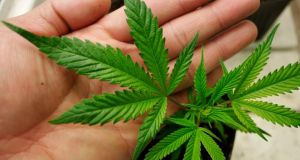 Four men were arrested and a large quantity of cannabis herb seized in Dublin yesterday.

A car was stopped on searched yesterday afternoon on Kylemore Road in Ballyfermot, resulting in the discovery of 1kg of cannabis.

Three men in the car, ranging in age from their 20s to 50s, were arrested and are being held at Ballyfermot Garda Station under Section 2 of the Criminal Justice (Drug Trafficking) Act, 1996.

A van was subsequently stopped and searched on Clonsilla Road, resulting in the seizure of approximately 8.5kg cannabis.

The driver, a man in his late 30s, was arrested and is being held at Blanchardstown Garda station under the same provision.

In a follow-up search of premises on Dale Road, Stillorgan, gardaí seized approximately 15kg of the drug. Subject to analysis, the total of 24.5kg of cannabis herb has a street value of €490,000.

In a later search of a separate house, a large quantity of cash was also discovered and has been seized.

Officers from the Garda National Drugs Unit supported by the National Surveillance Unit, the Garda Organised Crime Unit and local drugs units were involved in the planned operation.