Sherlock calls on GAA to take lead on racism

Sherlock’s message was supported by Ronnie Delaney, an Olympic gold medallist for Ireland in 1956 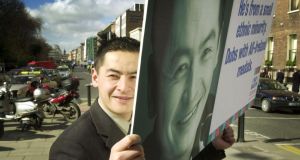 Jason Sherlock told the conference that growing up in Finglas, with a father from Hong Kong and an Irish mother, it was hard to deal with the negativity and abuse he got. Photograph: Frank Miller

Former Dublin footballer Jason Sherlock has warned that racism is likely to become a bigger issue in Irish sport in the years ahead as young players from different ethnic backgrounds come up through the ranks.

Speaking to The Irish Times at a conference on ethics and sport organised by the department of religions and theology in Trinity College Dublin at the weekend, the footballer called on the GAA to become “a flag-bearer” in tackling the problem before it got worse.

“There is no question that racism is going to be a bigger challenge in the years ahead when you look at the mix of nationalities in schools now,” he commented.

He said increasingly people playing sports at different levels “aren’t going to be what some people consider ‘authentically’ Irish”.

The Dublin player said it was “important that we accept that this change is coming and we put procedures in place to educate people about racism”.

Mr Sherlock told the conference that growing up in Finglas, with a father from Hong Kong and an Irish mother, it was hard to deal with the negativity and abuse he got.

Ronnie Delaney
Sherlock’s message was supported by Ronnie Delaney, an Olympic gold medallist for Ireland in 1956.

The 78-year-old told The Irish Times about the racism he witnessed in the US when he trained there in the 1950s.

“Charles Jenkins, an African-American athlete on my team, couldn’t stay in the same hotel or eat in the same restaurant as the rest of the team when we travelled south of a certain line in America,” he recalled.

“Today I see my grandchildren taking part in Gaelic, soccer and hockey, and with the changing Ireland, many of the children they are playing with are from different ethnic backgrounds.”