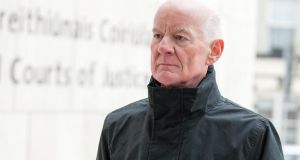 The head of the Irish Financial Services Regulatory Authority has said he did not know the full extent of businessman Seán Quinn’s holding in Anglo Irish Bank until March 2008.

Patrick Neary, who was appointed chief executive of the regulatory authority in 2006, told the trial of three former directors of Anglo he did not know the size of the holding until he was informed on March 21st, Good Friday.

The court had heard that then chief executive of the bank David Drumm and its chairman Seán FitzPatrick had known about the holding since September 2007. Mr Quinn had contracts for difference (CFDs) – investment products based on share value – worth more than 28 per cent of the bank’s shares.

Mr Neary said he got a call from Mr Drumm in autumn 2007 and had a meeting with him. Mr Drumm asked if he could come to see Mr Neary “in person”. This was an unusual request, Mr Neary said, as he did not normally meet chief executives, but he agreed.

He said Mr Drumm was concerned about rumours that Mr Quinn was possibly holding CFD positions in the bank. Mr Neary said he had heard the rumours as well, and Mr Drumm felt the holding might be “even bigger” than 10 per cent. He wanted to know if the regulator could find out, Mr Neary said.

However, he told the court, CFDs were not regulated products so “we had no statistics, no information collected and no way of finding out”. He said he asked Mr Drumm if he established further information to let him know.

Cross-examined by Brendan Grehan SC, for Pat Whelan, Mr Neary said Mr Drumm was “most probably aware” at the time that Mr Quinn had a CFD holding of 28 per cent, “but he chose not to tell me”.

Mr Grehan pointed out that evidence had been given that the board of Anglo became concerned about the holding in September 2007 and had asked Mr Drumm to inform the regulator of the position. The board understood “you were told”, Mr Grehan said.

Mr Neary also told the court of a meeting with Mr Quinn some time in January 2008. He said Mr Quinn called his secretary and said he was in town and thought he should drop in and see the regulator.

Mr Neary said Mr Quinn outlined the strength of Quinn Direct and the strength of the Quinn Group. He also said he had a small CFD holding in Ryanair and Anglo, but did not intend to hold on to it.

Mr Grehan asked if Mr Neary questioned Mr Quinn about the CFDs in Anglo. Mr Neary said he did not ask him “straight up”, but came at it in a roundabout way. This was when he got the response that there were small holdings.

Mr Neary said Mr Quinn was entitled as a private citizen to have all the investments he liked and he “didn’t feel it was appropriate to tackle him”. If he had been armed with the knowledge of a large holding, he “may have approached it”, he said.

Mr Neary said there were four times which he could have been informed about the size of the CFDs, one involving Mr Drumm and three involving Mr Quinn, but “they didn’t do so”.

He added that “quizzing” people about their investments was “not something a regulator would go around doing”.

Mr Neary also told the court that when he was informed of Mr Quinn’s “significant holding”, on Good Friday, that he thought it was “a very serious disclosure and a very worrying one”.

He said his office arranged to meet the governor of the Central Bank the next morning.

At the meeting, they agreed it was serious and recognised it could have “serious implications if not addressed in a proper manner”.

Asked who the main person dealing with Anglo was, Mr Neary said it was Con Horan, then prudential director at the bank. “I had limited involvement,” he said.

Cross-examination of Mr Neary is due to resume next Tuesday.