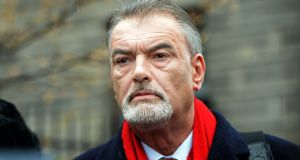 A judge at the High Court said he believes he will endorse a European Arrest Warrant that seeks to have Ian Bailey sent to France to face trial. Photograph: Eric Luke/The Irish Times.

A judge at the High Court said he believes he will endorse a European Arrest Warrant that seeks to have Ian Bailey sent to France to face trial for the intentional homicide of Sophie Toscan du Plantier.

Mr Justice Tony Hunt said he would wait until he heard submissions from Mr Bailey’s legal representatives on Thursday before making his final decision.

“I believe I will endorse it because I feel it complies with the act.”

Mr Justice Hunt said endorsing the warrant “is not an endorsement of anything else and I want that to be clearly understood.”

If he does endorse the warrant on Thursday there will be further hearings at the High Court to decide whether to send Mr Bailey to France.

Mr Bailey denies any involvement in the death of Ms Toscan du Plantier and his defence is objecting to the extradition. He has also alleged a garda conspiracy to frame him for the killing.

French authorities have already served Mr Bailey with an indictment and want him to face trial in France for the alleged voluntary homicide of Ms Toscan du Plantier, who was found beaten to death outside her holiday home in Schull, Co Cork in December 1996.