Dispute over sale of Mayo island returns to High Court 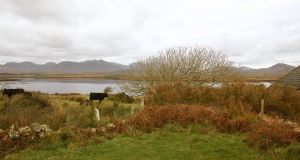 A long-running legal dispute over the sale of an island off the west coast has returned before the High Court.

A long-running legal dispute over the sale of an island off the west coast has returned before the High Court.

Bartragh Island, in Killala Bay, Co Mayo, was bought in 1997 by a company controlled by international golfer Nick Faldo with the intention of developing a championship links golf course there.

However, Mary Molloy, former owner of the island, later sued actor Sean Simon over an agreement both entered into in 1996 in respect of the island.

In 2003, Ms Molloy, of Quay Road, Killala, sought an order seeking specific performance of an option agreement she entered with Mr Simon, of Deerpark, Loughrea, Boyle, Co Roscommon, in 1996 to buy Bartragh Island and other adjacent islands in Killala Bay.

She had bought those lands in 1989 intending to develop an institute for biodynamic therapy but fell into arrears with her lender Irish Permanent, who put the property out to tender.

She later entered into an agreement with Mr Simon involving him providing IR£290,000 to purchase the property and her getting the option to buy it back within 90 days if she paid a total sum of IR£390,000.

While she had finance in place to buy back the island, the deal did not proceed.

INBS took possession of the island because it was owed monies by Mr Simon and agreed to sell the land for €1.5 million to Nick Faldo International in October 1997.

The High Court ruled in 2003 that Ms Molloy was entitled to damages against Mr Simon after finding that her bid to exercise the 1996 agreement had been frustrated.

However, as Ms Molloy had previously agreed an INBS mortgage on the island would rank ahead of her option, the financial institution was entitled to complete the 1997 sale to Nick Faldo International, the High Court found.

An assessment of damages in favour of Ms Molloy against Mr Simon was the next step, but before any such assessment, she initiated an appeal to the Supreme Court against aspects of the High Court decision.

That appeal was later withdrawn and in 2014 the High Court granted her application to re-enter the assessment of damages matter.

On Tuesday, Ms Justice Miriam O’Regan dismissed a preliminary application by Mr Simon to strike out the assessment application on the grounds of delay.

The judge accepted there had been a delay but ruled it was in the best interests of the parties and justice that the assessment should proceed.

John Peart SC, for Mr Simon, earlier argued that no reason had been given for the delay of more than 10-and-a-half years, the case had been “lost in the mists of time” and was effectively over.

John Hennessy SC, for Ms Molloy, denied the delay was inexcusable and said dismissing the case would be prejudicial to his client, especially as she had the benefit of a High Court judgment.

The hearing will now proceed to assess damages.