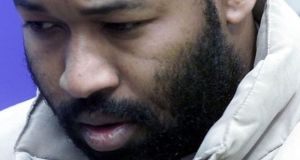 The wife of a man whose conviction for murdering their infant son was quashed after he was diagnosed with paranoid schizophrenia 10 years later has told a jury that the way her husband has been treated is “beyond cruel” and no one deserves to suffer in the way he has.

The Central Criminal Court trial also heard on Tuesday that a psychiatrist who gave evidence at the 2003 trial that the accused – who subsequently spent 16 years in jail – was not suffering from paranoid schizophrenia, now thinks that the man displayed early signs of the mental condition at the time.

1 Mother of McGinley siblings arrested on suspicion of murder
2 Sinn Féin manifesto ‘goes big’ to set it apart from election rivals
3 Billie Eilish: Her stance that her body is not public property is still a radical act
4 Claim withdrawn after court shown video of man walking without wheelchair
5 Catherine Noone’s apology over autism comment ‘good enough’, Taoiseach says
6 Ireland v Scotland: Murray keeps Cooney at bay in starting lineup
7 No obvious signs of injury on remains of McGinley children
8 Who is Caelan Doris? Meet Ireland’s newest rugby international
9 Election fact check: Is the ‘pensions timebomb’ a myth?
10 Det Adrian Donohoe killed in raid carried out for ‘base’ criminal motive of money
11 Noel Grealish faces fight to retain Galway West seat, poll suggests
12 Election 2020 TV debate: The best debater is, unexpectedly, Richard Boyd Barrett
13 Fair Deal nursing homecare leaves little for bills and gifts
14 Kobe Bryant crash: Questions emerge about why helicopter was flying in fog
15 Daughter denied she left house to get ‘permanent peace’ from mother
16 Portugal set to curb tax breaks for wealthy foreigners
17 Autism comments not Catherine Noone’s first brush with controversy
18 Baby born on Dublin street in early hours of morning
19 ‘You’re moving to Ireland? God help you. I hope you never get sick over there.’
20 Conor Pope: My first parkrun and it was mortifying
21 Girl (9) seeking ‘utterly irreplaceable’ pig teddy lost at Dublin Airport
22 Sinn Féin manifesto pledges huge increases in spending on housing, health and children
23 Fintan O’Toole: It is politically easier to keep spending on bad policies than to shift to good ones
24 Gardaí may have to wait days to interview mother of McGinley children
25 McGinley deaths: ‘I will always remember your three happy faces’
26 Gerry Thornley: Temple Carrig are the true schools rugby story of the season
27 Fintan O’Toole: Historians will not believe sheer ignorance of Brexit supporters
28 Costa Book of the Year 2019 is announced
29 St Mary’s come close to Belvedere, just not close enough
30 Tax and spend: What have FG done for your pocket?
31 Trump plan the stuff of dreams for his friend Netanyahu
32 Higgins says claim UN criticism of Israel is anti-Semitic ‘inappropriate’
33 How do you get bereaved fathers to talk? Bring a football
34 Recycling, reusing and reimagining waste into new clothing and accessories
35 Intellectually disabled man challenges marriage ban and court wardship
36 Six forgotten Irish women who achieved the extraordinary
37 Man given suspended sentence for assaulting transgender escort
38 Why our love for Leo is withering on the vine
39 Put a spring in your step for running in February
40 Boy who fell off a stage at a wedding is awarded €35,000
Real news has value SUBSCRIBE