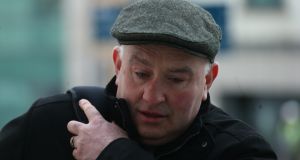 Murder accused Patrick Quirke told a social worker that Mary Lowry was leaving her children unsupervised for long periods and had “lost the run of herself” after starting a new relationship, the Central Criminal Court has heard.

Deirdre Caverley, who gave evidence via video link from Boston, told prosecution counsel Michael Bowman SC that Mr Quirke contacted her when she worked for Tusla, the child and family agency, in 2011.

On February 4th of that year he called to express concern about the “well-being and safety” of Ms Lowry’s three children, who he alleged were being left unsupervised for long periods of time, mostly at weekends.

He said Ms Lowry, his wife’s sister in law, would leave the children from 4pm until the early hours and that this had been going on for about three months.

He told her the wider paternal family were concerned but afraid to raise the issue for fear of “repercussions”. He said the children’s grandmother was “especially” concerned.

Mr Quirke said Ms Lowry had been widowed about 3½ years earlier, that she had recently started a new relationship and was spending time with her boyfriend when the children were left alone.

Ms Caverley said she took a note of Mr Quirke telling her Ms Lowry had “lost the run of herself and become fixated on the relationship” and was “failing to take into account the needs of her three children” due to this new relationship.

The social worker said she suggested to Mr Quirke that Ms Lowry might be using childcare while she was away and asked whether their grandmother, who lived in a section of the house adjoining Ms Lowry’s, could be looking after them.

She said Mr Quirke told her that the grandmother was not asked to look after the children and advised him to call gardaí if there were immediate concerns. She also told him that she would open up a report and look into the matter.

She called to Ms Lowry’s home unannounced on February 10th, 2011 but there was nobody home. She saw a man there who did not identify himself but he did not tell her when Ms Lowry would return. She said a colleague made a further visit to the Lowry home.

Under cross examination, Ms Caverley agreed with Bernard Condon SC that Mr Quirke told her that Ms Lowry was “entitled to be in a new relationship”.

Mr Quirke (50), of Breanshamore, Co Tipperary, has pleaded not guilty to the murder of part-time DJ Bobby Ryan, who went missing on June 3rd, 2011 after leaving the home of his girlfriend, Ms Lowry, at about 6.30am.

His body was found in an underground run-off tank on the farm owned by Ms Lowry and leased by the accused at Fawnagown in April 2013. The prosecution claims Mr Quirke murdered Mr Ryan so he could rekindle an affair with Ms Lowry (52).

Earlier, the jury heard that Ms Lowry’s computer was used to search for Mr Ryan’s name the day before his body was recovered. Ms Lowry gave her computer to gardaí investigating Mr Ryan’s death.

Det Garda Paul Fitzpatrick, of the Garda Cyber Crime Bureau told Mr Condon that when he searched Ms Lowry’s computer for key words he found a search for ‘trace Ireland Bobby Ryan’ carried out at 9.45pm on April 29th, 2013.

Mr Ryan’s body was discovered the following day by the accused.

Mr Condon also asked the witness about a forensic analysis carried out on a computer seized during a search of Mr Quirke’s home following the discovery of the body. The jury has heard that the computer was used in December 2012 to search for “human body decomposition timeline” and “rate of human decomposition”. The witness agreed with Mr Condon that this computer did not have a password and he could not say who was using it at any given time.

He further agreed that Google suggests search words when a person starts typing in the search bar and he could not say which search terms were inputted by the user.