Patrick Quirke sentenced to life for murder of Bobby Ryan 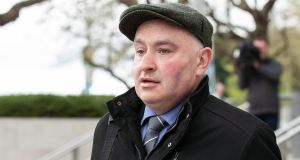 Tipperary farmer Patrick Quirke has been sentenced to life in prison after being found guilty of the murder of part-time DJ Bobby Ryan.

The jury delivered a majority verdict of 10 to two.

Members of the deceased’s family cried in court after the verdict was read out.

Quirke, who had denied murdering his alleged love rival, remained impassive when the verdict came. His wife Imelda also showed no emotion, sitting with her head bowed.

Quirke was taken from the court ahead of sentencing as the judge adjourned the court temporarily.

Ms Ryan said the world as they knew it had been torn apart on June 3rd, 2011, the day Mr Ryan went missing.

The Ryan family suffered mental anguish, she said, closing their eyes at night and picturing “Daddy” with fear in his eyes.

They wondered: “Was Daddy crying out for help?”

Their torment was all the greater knowing one day they would have to sit down with their father’s grandchildren and explain how he was taken from them.

“We will never be doubtful of just how much that he loves us.”

Directly addressing her late father, she said: “So until we meet again Moonlight, know how much you are loved.”

The judge in the trial, Ms Justice Eileen Creedon, expressed her sincere sympathies to the family after sentencing Quirke to life imprisonment, starting today.

Earlier, the judge had told the jury she would accept a majority verdict.

The jury returned to the Central Criminal Court for their eighth day of deliberations on Wednesday morning.

The judge then told the jury members that they had been deliberating for 18 hours and 24 minutes and that in those circumstances the court would accept a majority verdict.

This meant they could come to a verdict on the basis of an 11 to one, or 10 to two, decision. “Anything less than 10 is not acceptable,” she said.

If the jury could not agree on a verdict, then they could write “disagree” or “disagreement” on the issue paper, she said.

“This is entirely a matter for you and you can take all the time you want,” she said.

The jury then resumed deliberations.

Shortly after 1pm, Ms Justice Creedon sent the jury for lunch asking them to return to their discussions later on Wednesday afternoon.

Quirke (50) of Breanshamore, Co Tipperary had pleaded not guilty to the murder of Mr Ryan, a part-time DJ going by the name Mr Moonlight. Mr Ryan went missing after leaving his girlfriend Mary Lowry’s home at about 6.30am on June 3rd, 2011.

His body was found in an underground run-off tank on the farm owned by Ms Lowry and leased by the accused at Fawnagown, Tipperary 22 months later on April 30th 2013.

The 13-week trial, the longest murder trial in the history of the State, was followed by a week of closing speeches from barristers for the defence and prosecution.

The prosecution claimed that Quirke murdered Mr Ryan so he could rekindle an affair with Ms Lowry (52). The defence said the prosecution had failed to prove their case beyond a reasonable doubt and that Quirke should be acquitted.

In her charge last week Ms Justice Creedon told the jury they must not be influenced by emotion, sympathy, anger or disgust, and they must treat circumstantial evidence against the accused with care.