Jury discharged in trial of Kilkenny man accused of murder 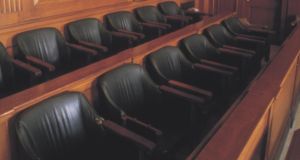 The jury has been discharged in the trial of a 34-year-old Kilkenny man accused of murdering a 25-year-old man in Waterford last year.

Tadhg Butler, with an address at Seafield in Tramore, Co Waterford is charged with murdering Michael O’Dwyer at that address on 10th January, 2014.

Mr Butler, also known as Thomas O’Grady and originally from Kilkenny, has pleaded not (NOT) guilty to murdering his fellow Kilkenny man by stabbing him once in the chest.

Mr Justice Patrick McCarthy on Thursday morning told the jury of eight women and four men they would recall a legal issue had arisen yesterday which has now given rise to certain legal submissions.

“As a consequence of which I have decided the case will be tried by a different jury now. Certain legal consequences flowed from certain legal evidence given yesterday. Its no reflection on you, its something that occurs from time to time,” said Mr Justice McCarthy.

The trial is expected to last two weeks.