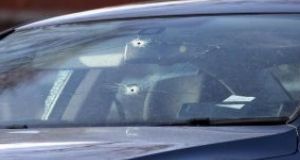 Bullet holes in the windscreen of the vehicle in which Paul Kavanagh was shot, in Church Avenue, Drumcondra, Dublin. Photograph: Colin Keegan/Collins Dublin

Gardaí have taken more than 300 statements in relation to the death of gangland murder victim Paul Kavanagh.

The 27-year-old was reportedly murdered for stealing money from the Christy Kinahan crime gang, for whom he is thought to have been working.

Kavanagh was shot dead while sitting in his car, a VW Passat at Church Avenue, Drumcondra on Dublin’s northside around 11.30am on March 26th, 2015.

The inquest into Kavanagh’s death, which first opened in June 2015 at Dublin Coroner’s Court, heard that gardaí are still collecting evidence for a file to be submitted to the Director of Public Prosecutions.

Numerous lines of inquiry have been established, Dublin Coroner’s Court heard, with some 300 statements taken by gardaí as part of the ongoing investigation.

A stolen white Audi A1 which was found burnt out on Church Avenue, Drumcondra shortly after the incident is thought to have been used in the murder.

Gardaí ­ believe Mr Kavanagh was ambushed in a well-planned attack by killers who had him under surveillance at the rented house he shared with his partner and two young children.

He had minor convictions for road traffic and public order offences, but was suspected of involvement in drug-related organised crime.