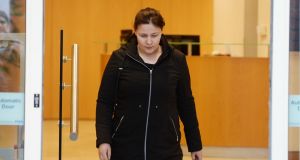 Katie Connors at the Coronors Court inquest into the deaths of 10 people at a fire on Glenamuck Halting Site, Carrickmines. Photograph: Alan Betson

A fire that claimed 10 lives at a Dublin halting site reached temperatures in excess of 650 degrees, an inquest has heard.

Ballistic detectives gave evidence of the recovery of nine bodies from an extensively burnt mobile, the home of Thomas Connors, his wife Sylvia and their children at the Glenamuck halting site in Carrickmines.

The fire started from hot oil in a chip pan on an electric cooker and spread rapidly from the kitchen through the mobile, killing all nine occupants within 15 minutes.

It then spread through an upper window in the main bedroom to a second mobile located less than one metre away shortly after 4am on October 10th, 2015.

Mary Connors, the six-month-old daughter of Thomas and Slyvia, was pronounced dead in hospital.

Dublin Coroner’s Court heard the chip pan was so badly burnt it was almost unrecognisable.

“The whole unit was subject to extreme fire damage, with the entire roof destroyed. The kitchen was the most intense area of burning, particularly around the cooker area,” Detective Garda Shane Curran said.

“There was a molten lump of aluminium on the rear right hot plate. There was a metal basket that had warped, suggesting a chip pan had been in place.”

The court heard the chip pan was made of aluminium, which melts at 650 degrees.

“The fire (temperature) was above that in this location. The remains of a chip pan was all but burnt away so as to be almost unrecognisable,” Det Garda Curran said.

Detectives found the rear right electric hot plate in the switched on position.

“The fact the chip pan had completely melted strongly suggests there was a sustained fire in that area. No other likely ignition source was found,” Det Garda Curran said.

Family members left the courtroom as the jury heard evidence of how DNA was used to identify the remains of the victims. Detectives used the Interpol system to identify remains for the first time in a process co-ordinated by Deputy State Pathologist Dr Margot Bolster.

All nine bodies were found on the floor of the destroyed unit.

The court heard that carbon monoxide works its way down from ceiling height. “Someone who stands up in these conditions could be quickly overcome by poisonous gases,” Det Garda David O’Leary told the court.

The inquest heard details of how the fire spread through the mobile, burning through closed bedroom doors, before spreading to the next mobile, where baby Mary Connors had been placed after she was recovered from the fire. The distance between the two units was 81cm.

The inquest heard from the first gardaí, paramedics and firecrew to arrive at the scene.

Dublin Fire Brigade units responded to a call at 4.20am.

Garda Christina O’Neill told the inquest she arrived at the scene at 4.38am.

“From the opposite side of the M50 there was substantial smoke visible and you could see flames,” Garda O’Neill said.

Firefighter Ray Martin entered the burning mobile, where the fire had spread, with his colleague Vaughan Mason in a bid to save Mary Connors. The six month old infant had been rescued from the fire next door along with her brother Tom by their uncle, John Keith Connors (14).

“There was a lot of thick smoke and heat ... I saw the baby lying on the bed with the duvet turned over beside her. I took the baby off the bed and cradled her and brought her to the door,” Mr Martin said.

The baby displayed no signs of life and was not breathing. There were burn marks on her face and arms, the inquest heard. She was taken to Tallaght Hospital where she was pronounced dead.

The inquest continues on Thursday with expert technical evidence from the scene of the fire.