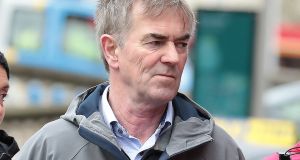 Next-door neighbours who have levelled accusations of intimidation and harassment at one another, after having fallen out over access to the backs of their terraced houses, have agreed to allow a mediator try to settle their disputes.

The Circuit Civil Court heard on Monday that architects Rob Curley and Alfonso Bonilla, who live at 51 Drumcondra Road Lower, Dublin, sought to restrain their neighbours Michael Caulfield (living at number 49) and his brother Anthony Caulfield (at number 47) from blocking access to a laneway in July last year.

Conor Bowman SC, counsel for Mr Curley and Mr Bonilla, told Judge Gerard Griffin that related injunctive proceedings had been adjourned on the basis of undertakings given by all parties until the hearing of Monday’s trial over access, alleged harassment and claims of assault.

He said the Caulfield brothers had made similar allegations against his architect clients in a defence and counterclaim in which they were looking for the same remedies and restraints against both Mr Curley and Mr Bonilla.

Both sets of parties were alleging they had been videoed by the other on their own property.

Mr Bowman, who appeared with barrister MP Guinness and Cormac O’Ceallaigh Solicitors for the architects, told the court that difficulties had arisen after Mr Curley and Mr Bonilla had purchased their home at number 51 and sought access via a narrow laneway which ran along the back of all three houses.

They had claimed access to the laneway had been blocked by parked cars, while in a counterclaim it was alleged a car belonging to one of the Caulfields had been scratched and damaged by a wheelbarrow being pushed past it.

John Donnelly SC, who appeared with barrister Fiachra Breathnach and Lawlor Partners for the Caulfields, said the issues between the neighbours were crying out for mediation and he hoped that matters of complaints of assault could be dealt with by adult caution by gardaí and the matter then proceed to mediation.

Mr Justice Griffin said if complaints of assault were to proceed to the criminal courts they could have serious repercussions for anyone involved who might in the future wish to travel to the US or Canada. He would not allow matters of outstanding alleged criminality to go before a mediator. It would be only on the basis of acceptance of adult cautions or a complete withdrawal of claims of assault that he would allow the case to go to mediation.

“I take it from having read the pleadings that the alleged assaults consist of no more than pushing and shoving,” Mr Justice Griffin said.

The judge said that on the motion of the court itself he would refer the matter to mediation on the basis that all undertakings already given to the court by the parties would continue. He reserved costs.