Fingerprints in alleged harassment trial did not match accused 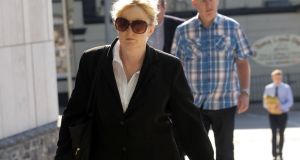 The trial of a garda for allegedly harassing a State solicitor has heard that none of the fingerprints found on abusive material matched those of the accused.

Eve Doherty (49), a garda based in Dublin, denies harassing Elizabeth Howlin between September 2011 and March 2013 and making false statements on two dates in March 2013 claiming Ms Howlin was perverting the course of justice.

Ms Howlin worked as a directing officer with the Director of Public Prosecutions (DPP) and was involved in deciding whether or not to direct prosecutions in criminal cases.

Over an 18-month period, letters and emails were sent to Ms Howlin’s home, her place of work and to her GP calling her a “corrupt bitch” and an “incompetent useless hobbit”.

The material, which included posters left around her housing estate, falsely claimed that Ms Howlin was a political appointee and that she would “pull” files to prevent the prosecution of anyone connected to her or the government. Ms Howlin is a distant cousin of the TD Brendan Howlin.

Michael O’Higgins SC, defending, told the jury at Dublin Circuit Criminal Court that Ms Doherty denies being the author of any of the letters and emails. He said the allegations contained in them were hideous and defamatory.

On day ten of the trial, Detective Garda Conor Kiely told the jury that he carried out comparisons between the fingerprints provided by Ms Doherty and those found on a number of exhibits.

The exhibits included four copies of the poster distributed around the housing estate. None of the fingerprint marks found on these matched the prints of the accused.

Marks were also found on a letter addressed to the DPP Claire Loftus, a letter sent to the office of the DPP and a letter sent directly to Ms Howlin at her home. None of these marks matched the fingerprint samples taken from Ms Doherty.

The trial continues before Judge Melanie Greally and a jury.