Bank can repossess home of mother of four, judge rules 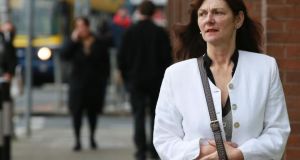 The High Court has found Bank of Ireland may repossess the €700,000 home of a mother-of-four who owes almost €600,000 on an outstanding mortgage.

Mary White (57) said BoI Mortgage Bank “can have the keys” to the house at Upper Rathmines Road, Dublin, because she and her family have moved out after a long-running legal battle over the mortgage.

Ms White, who represented herself, declined Mr Justice Paul McDermott’s offer of a six-month stay on eviction from the house saying she would “like nothing to do with it”.

When one of her daughters interrupted her from the back of the court saying “Mam”, the judge said he would give the six month stay in any event.

The court heard Ms White, who said her only income is from social welfare, was party to loans given by the bank in 2004 which were secured on the Rathmines house. It was originally let out in flats, but she later moved into it as the family home.

Ms White told the court she had marital difficulties between 2004 and 2008 during which time the bank granted a number of moratoria on capital and interest repayments.

She claims the house was worth €1.3 million in 2008 and the bank should have moved sooner to deal with the arrears. Had that happened, the house could have been sold before the market went down and outstanding repayments, now totalling €596,586, could have been paid off, she said.

She had always wanted to clear her debts and had tried to do so including by taking in tenants, she said.

The bank said it had repeatedly shown forbearance over the years towards Ms White but last year, after three years in which no repayments were received, it obtained a Circuit Court order for possession.

When the city sheriff arrived at the house in September to evict her, she appealed the decision to the High Court which yesterday found against her.

Mr Justice McDermott said it was a case with a “sad history” with consequences profoundly significant for Ms White and her family.

“The difficulty in this case is that unfortunately Ms White cannot afford the loans and the bank asserts its entitlement to repayment or, in its absence, to seek possession”, he said.

He rejected a number of legal submissions from Ms White including in relation to whether BoI Mortgage Bank was the correct entity to take the proceedings.

The bank had lawfully transferred the mortgage to this entity even though Ms White originally dealt with the Governor and Company of Bank of Ireland, he said.

The court was satisfied, on the balance of probabilities, and on evidence presented, the bank’s application for possession must succeed, the judge said, affirming the Circuit Court order.