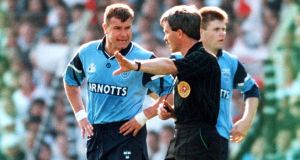 Dublin’s Charlie Redmond is sent off during the 1995 All-Ireland football final against Tyrone. Photograph: Inpho

Former Dublin footballer Charlie Redmond has appealed for information about his All-Ireland winners medal that was stolen by burglars a decade ago.

Mr Redmond was a member of the Dublin team that won the All-Ireland football championship in 1995. He scored the only goal of the match and was also sent off in Dublin’s 1-10 to 0-12 victory over Tyrone.

“My house was broken into about 10 or 12 years ago and they only took one thing. They took the medal. Just the one thing and it was upstairs in the drawer. The only thing they took was the medal. They actually left [my wife] Gráinne’s engagement ring which was worth an awful lot more,” he told Newstalk’s Off the Ball.

Charlie Redmond just said that he had his All-Ireland medal robbed from his house 12 years ago. Internet - let's track it down.

“You can’t get a replacement, there’s only a few given out. A couple of my team mates offered to give me theirs but obviously I couldn’t take theirs,” he said.

“If anyone can find it or has seen it, they can let me know.”

He added: “Maybe one of the players took it or a Tyrone man.”

Speaking to The Irish Times, Mr Redmond said he remembers encountering the burglar in his home one Saturday afternoon and chasing him out.

He said there had been no leads on the medal since that time and he has not contacted the GAA to look for a replacement.

“It was great to win it obviously but it’s just a piece of metal. The memories and the achievement itself mean more to me,” he said.

“I’ve no idea what good it is to the person who stole or what it’s worth to them...Dermot Deasy had his stolen two or three months ago so maybe our pair of medals are lurking out there somewhere.”