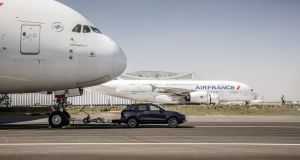 Porsche tows A380 aircraft
Two world famous brands challenged each other this month in a feat of strength. The Porsche Cayenne towed a 285-tonne Air France A380 aircraft. The match was held at the A380 hanger at Charles de Gaulle airport. The two contestants shaped up in front of Guinness Book of Records adjudicator Pravin Patel who said: “Watching the Porsche Cayenne tow one of the largest aircraft in the world definitely ranks as the most spectacular.” The previous record was for a Nissan Patrol towing a Russian Iluyshin-76 cargo plane weighing 170.9 tonnes at Sharjah Airport in United Arab Emirates.

Lost baggage down 12 per cent
The SITA Baggage Report for 2016 was released last week and reports good news for travellers with mishandled bags down 12.25 per cent, the lowest ever recorded. This is despite passenger numbers rising to 3.77 billion last year. In the past 10 years lost bags have fallen by 70 per cent due to new processes for bag handling and improvements in technology. By June next year every piece of baggage will be tracked along its journey. IATA Resolution 753 comes into force then and every item has to be recorded at four mandatory points as it passes from check-in to being delivered to passengers.

Hotels hit by hackers
Hackers have been working their way though many large hotel groups stealing credit card information of customers. In recent years Hilton, Hyatt Hotels, Omni Hotel, Starwood and Trump hotels have all been hit. Now the hackers are stepping deeper into the world of reservations systems and acquiring access to payment information. Sabre Corporation, one of the biggest computer reservations systems in the world, has warned customers of a data breach which may have compromised card data and customer details. The breach affected one of its platforms which hosts 36,000 properties.

Dublin ranked 13th for international conferences
Dublin is rising up the ranks of world conference city ratings. International Congresses and Conventions Association show the capital rising five places to 13th. The city hosted 118 international association conferences last year. This week the Fáilte Ireland Dublin Convention Bureau will target new business from the UK with its “Meet Dublin in London” event where more than 300 meetings with events buyers will take place.