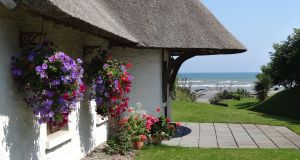 The 300-year-old Thatcher’s Rest Cottage, set on six miles of sandy beach in the Boyne valley.

A self-catering cottage in Bettystown, Co Meath, has been named Best Holiday Home Beach House in this year’s European Holiday Home Association Awards. The 300-year-old Thatcher’s Rest Cottage, set on six miles of sandy beach in the Boyne valley, is owned by Liz and Roger Pickett who were awarded not only for their sublime property but also for their impeccable service. To book a stay in the award-winning abode, see cottages-ireland.com.

Music to our ears

This weekend Airbnb hosts four lucky competition winners in the most iconic recording studio in the world. Abbey Road, where some of the most celebrated musical recordings of the 20th century have taken place by artists including The Beatles, Amy Winehouse and Tony Bennett, becomes a hotel for just one night. Here’s hoping this becomes a regular listing on the website. See airbnb.ie for more.

Interiors mavens will be familiar with West Elm, the Brooklyn-based furnishings company with a cult following. Now the design leaders are turning their hand to hotels, with properties set to open in Detroit, Michigan and Savannah, Georgia, in late 2018. Guests can expect their uber-cool aesthetic paired with art work by local artists. Visit westelm.com for more.

Rathwood’s Halloween Train: Hop aboard the Rathwood Express October 15th-31st for a journey through the spooky forest and, with the help of a few good witches, carve your very own pumpkin. Tickets from €10; wicklow.ie

Murder Mystery at Hillgrove: This Macabre Monaghan Murder Mystery Weekend will have you scared senseless. From €185 pps, October 28th-29th. hillgrovehotel.com

Hocus pocus at the Mustard Seed: The Limerick hotel offers barm brack on arrival and dinner by candlelight, where guests can keep their eyes peeled for the resident poltergeist. Two nights bed and breakfast with dinner on one evening from €195 per person sharing; mustardseed.ie

travellers to keep up to date with events, experiences, food, entertainment news and activities throughout Thailand. Download it for free on IOS and Android phones.

Take this autumn as the perfect excuse to visit Mallow’s exceptional Longueville House, a 20-room manor hotel in the heart of the Blackwater Valley. Stay for two nights midweek from €119 per person sharing with breakfast each morning and a seven-course tasting menu in The Presidents’ Restaurant on the first night. To top it all off, traditional afternoon tea is served in the drawingroom, overlooking the grounds and rolling hills beyond. Their famous home-brewed cider and jams are worth nipping in for, alone. See longuevillehouse.ie for more.

All eyes on Tenet, the spy movie with everything to prove
Browser: Lively fictional retelling of a fateful year for Ireland

So you’re thinking of emigrating? You haven’t a lot of options
Real news has value SUBSCRIBE