Unflappable ad executive and stalwart of the GAA 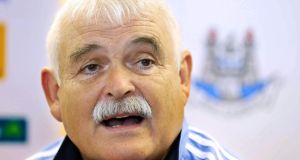 Andy Kettle: turned up at games wearing the team tracksuit as he didn’t want to be seen as a ‘suit’ in the stands. Photograph: INPHO/Cathal Noonan

Andy Kettle was hard to miss, His shock of black hair may have turned white, but his voice remained undimmed.

On the touchline at a weekend hurling or football fixture, his bellowed instructions, advice and admonitions rang out as clear as a bell.

He loved Gaelic games passionately, and when he died unexpectedly aged 68 this month, he had just been re-elected chairman of the Dublin County Board of the GAA.

On Monday mornings another Andy Kettle turned up in the Irish Times office, then in Fleet Street. This one worked on the advertising side for 27 years. He got on with things, and more importantly with people, in a calm unfussed way.

In the days before information technology turned lively newsrooms into something resembling insurance offices, producing a daily newspaper was often an exercise in creativity, open conflict and confusion.

Rows flared up over allocation of space as deadlines loomed, but Andy Kettle remained unflappable, his head a little to one side, not raising his voice, listening to what was said, extracting order from chaos, and winning respect and – very often – affection from colleagues in all departments right up to his early retirement in 2002.

They were of course two sides of the same man. He was proud of being one of an often overlooked strand of Irish society – the rural dwellers of Co Dublin.

North of the airport lies good farming land, within the capital’s suburban transport network. Though they took part in the life of the city, the way of life of the people who lived here was very close to the land, and the GAA network was a crucial link. He met Phyllis Martin from Rush when working at nearby Blake’s Cross and they married in 1971, eventually setting up home at Warblestown near Swords.

Andy Kettle was later elected chairman of the GAA Dublin County Board and was returned unopposed for a fifth term just before he died. He was at the helm during a time of great success for Dublin GAA, when the county’s hurlers had league and Leinster SHC success, and its footballers won two All-Irelands.

As chairman he was “hands on”. He turned up at games wearing the team tracksuit, not wishing to be seen as a “suit in the stand”. He was proud of the fact that his take on sport was inclusive. In his youth he had played at all the three national stadiums, club rugby in Lansdowne Road, Gaelic at Croke Park and soccer at Dalymount.

Sport was important to him, but so also were his grandchildren. Thursday was their day. He rounded up as many as he could and drove them to the playground in Howth followed by a visit to Maud’s ice cream parlour. Then he took them to visit his sister Kate and other members of the extended family around the north county.

Andy Kettle died following a recurrence of an earlier illness which had appeared to have been cured. He is survived by his wife, Phyllis, daughters Niamh, Orla and Ciara, and sons Patrick, Peter and Eoin.